Maria Metaxioti is better known online as The Booted Cat. This computer engineering and informatics student is a proficient cosplayer, and you can follow her on Facebook.

This is an excellent cosplay of Gal Gadot’s Wonder Woman in the Patty Jenkin’s 2017 film.

The prequel to that smash hit is filming and it once against stars Gadot as Wonder Woman and Chris Pine as Steve Trevor (how that is possible remains to be seen). It also stars Kristen Wiig as Cheetah. The movie is out in June 2020, and so we might well start to see lots more Cheetah cosplay about this time next year.

Wonder Woman isn’t the only cosplay that The Booted Cat has done such a fine job on. If Facebook isn’t your thing then (one degree of separation) there’s also Instagram for a fine collection of costumes and outfits.

Did you enjoy this Superhero Week cosplay post? Let us know in the comments below, and when you’re done this teleport link will take you to a random Superhero Week article from 2012, when the tradition started, up to new posts from this week. 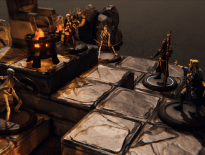