You are here: Home / Games / The Spelljammer connection; Why the Mass Effect space hamster is often called Boo

If you’ve played Mass Effect 2 you’ll probably have noticed you can buy a space hamster.

This is a long running roleplayer joke. In other words; the best geek natives get it.

The Spelljammer space fantasy campaign setting was released in 1989 for Advanced Dungeons & Dragons (2nd edition). One of the actual monsters players could encounter were giant space hamsters. These rodents were as large as a brown bear and covered in thick fur.

Since they were silly; they became popular.

The BioWare computer roleplaying game Baldur’ Gate was published in 1998. It was based in the Forgotten Realms fantasy setting for Dungeons and Dragons. One of the most popular NPCs (non-playing characters) was the mad ranger Minsc.

Minsc was popular because he carried a “miniature giant space hamster”. Yes, not surprisingly, it was the same size as a normal hamster. Minsc called his hamster Boo.

This is why you’ll find people talking about Boo in Mass Effect 2 (also by BioWare).

The Spelljammer connection; Why the Mass Effect space hamster is often called Boo 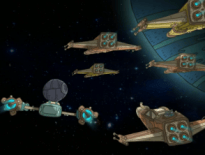