It’s a New Year and so DriveThruRPG’s New Year, New Game! sale is underway. In addition to to the usual impressive big discounts, there are discounts on discounted bundles.

One of the big titles in the bundle deal is the official Star Trek Adventures RPG from Modiphius Entertainment.

If you want to pick up a discounted collection of Star Trek RPG goodies then click here.

Geek Native spoke to Sam Webb, Modiphius’ Head of RPGs, about the future of the Star Trek Adventures game.

What are the three most important things a GM should do to make Star Trek Adventures feel like Star Trek?

The rules do a pretty good job of supporting the feeling of being a Starfleet officer, but you can use the character’s values and the mission’s directives to make your players think about their actions. In Star Trek a crew’s actions, while dealt with on a personal level, often have much larger repercussions for a civilization, and the Prime Directive is a huge guiding force in the way they should conduct themselves. Star Trek Adventures isn’t a phaser-fest either! You should always leave an option open for peaceful resolution or scientific solution to a problem. And if in doubt, start each session with a captain’s log!

Can you use Star Trek Adventures to create games that compliment and feel like Star Trek Discovery? What tweaks would you recommend?

It’s tough on our part because we don’t have the rights to create material for Star Trek Discovery, but there’s nothing stopping you using the rules to play in 2256!

Which do you think the most underused or underrated Star Trek alien races are?

I’m not sure. The core rulebook contains an excellent range of ‘founding’ species of the Federation, as well as some firm favourites. I like that Nathan included some little-explored species, like the Tellarites and Denobulans.

Does Star Trek Adventures hint at any mysteries in the Alpha, Beta and Gamma quadrants?

To quote Kirk, “there’s no such thing as the unknown– only things temporarily hidden, temporarily not understood.”

What might we see coming from Modiphius in the future to support Star Trek Adventures?

We’ve got the Sciences Division supplement coming out soon, and then the Alpha, Gamma, and Delta Quadrant books. We’ve got some other stuff in the works too, so keep an eye out for announcements! You can sign up at modiphius.com and follow us @Modiphius on Twitter and /Modiphius on Facebook!

Geek Native has permission to share one spread from the Star Trek Adventures RPG core rules. This is what we settled on; a page that finishes on Romulans and introduces the Borg.

The Gaming Gang reviewed the game last year and gave it 8.6 out of 10.

Upon getting a first look at the 374 page corebook for Star Trek Adventures a few things quickly struck me. The layout is nicely presented with a graphics style mimicking that of a LCARS (Library Computer Access and Retrieval System) from the era of TNG. For the most part the artwork is exceptionally well done, although there are a handful of images I thought fell a bit flat or just struck me as boring filler. Overall, like every RPG I’ve seen from Modiphius, this is a top notch presentation …with one exception. The default PDF is white text on black backround. While this might have seemed a good idea in theory (the blackness of space and all that) the reality is most readers will find the white on black to be very tiring on the eyes after a while. Granted, this might not be a problem if you’re reading a physical book but I found after about forty or fifty pages in a sitting, I just had to take a break from ye olde iPad to give my eyes a rest. The PDF edition, at least at DriveThruRPG, thankfully also comes with a traditional black on white “printer friendly” typeset. Trust me, read that one and your peepers will thank you. 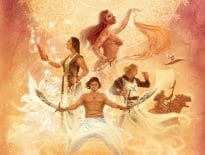 Tabletop & RPGs A spicy surprise: A review of Capharnaum – T… 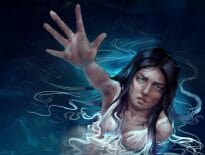