You are here: Home / Games / Tabletop & RPGs / Thoughts on the touchy nature of player mortality

In July Geek Native published a review of Nathan Quill’s Middenarde. In this guest post, Nathan shares his reply.

Games in which player death is par for the course have always been divisive. When the survival platformer Rain World released in 2017, it caused an explosion of debate over the worthiness of its punishing karma mechanic, which caused players to lose progress every time they died and respawned – which is not an uncommon event in Rain World’s brutal, punishing landscape. At its heart, the gameplay loop of Rain World is a nature simulator, and you play as a creature near the bottom of the food chain. That means that surviving long enough to reach a save point is an accomplishment, not an expectation.

Understandably, this didn’t resonate with many people. Personally, I found Rain World to be an enchanting and thoroughly deserving experience, but this opinion is not commonly reflected in its reviews, both from players and critics. There are many people who play games to relax and unwind, and struggling for your life is not usually a highly-rated leisure activity. Others play them for escapism and to do things they wish they could do in real life, and rarely is being brutally slaughtered on anyone’s bucket list. It surely takes some kind of morbid personality or acute masochism to want to spend your free time playing a game with a bleak, downtrodden atmosphere, with no promise of a hero’s ending or being chosen by prophecy, which will gleefully kill you the moment you slip up.

And yet, four years earlier, Papers, Please released to critical acclaim and widespread praise, and went on to sell several million copies and win countless awards, despite being a game with a bleak, downtrodden atmosphere, where you are neither a hero nor chosen (except by the October Labor Lottery, of course), and you and your family will slowly and miserably starve to death if you don’t do your job well. Papers, Please is widely lauded as art, whereas Rain World, with its beautiful graphics and faithfully immersive predator simulation, is to most people more of an irritating waste of time and money they cannot recommend to others.

Clearly, there is a line to walk here. These two games have much in common, but their reception is radically different. Papers, Please proves that the life of the vulnerable wretch can be engaging for just about anyone, and it did so many years before Rain World, so it isn’t as though the world wasn’t ready for it. What difference in execution allowed one to become mainstream, while the other was doomed to a cult following? Though neither of these games were released until well into Middenarde’s development, the thought of allowing as many people as possible to enjoy the tone and atmosphere I had in mind was always at the forefront of my mind.

In Geek Native’s review of Middenarde, Andrew described his stance on the game as such: “I’m not a crunch gamer. In my regular weekly game, we roll dice infrequently. I’ll go for abstraction and drama every time rather than min-maxing, and cunning character stat builds. It would be fair to conclude that Middenarde isn’t the sort of RPG I would like. Fair, but wrong.” That sentiment was exactly the kind I strove to create when I was working on the game. Players like Andrew, as well as new players for whom Middenarde might be their first tabletop RPG, were considerations I came back to time and time again while writing and refining the system.

Middenarde is a simulationist, brutal, and highly devoted to its setting. From such a description, you might expect it to be packed with crunch and rolling, for characters to die frequently and ignominiously, and for it to be largely impenetrable to those without an obsessive interest in late medieval history. On the contrary, I intended the game to be played with as few dice rolls as possible during normal play, with the philosophy that dice should be used as an arbiter when the outcome of an action was uncertain.

Whenever possible, I favored consistent numbers over repetitive rolls. Many times during development, I took an axe to mechanics I thought were unwieldy, redundant, or unnecessary. The game’s systems are carefully streamlined, to respect players’ time without undermining the tone it’s trying to set. I think this approach makes the game more accessible to newcomers, too, since there are few mechanics at work outside of combat, and the focus is on roleplaying one’s character.

While I never compromised on the principle that the player characters ought to be disadvantaged and highly mortal (it’s always possible for any character to be permanently killed in a single hit), I recognized that players needed to be able to invest in and care about them. A level 1 character in Middenarde starts with barely enough for the clothes on their back and some food and water. I introduced the heirloom mechanic so that new characters could always make one big purchase, like a weapon or armor, without having to skimp on essential supplies. The luck system also gives players a leg up against the brutal mechanics, giving them bonuses in combat, survival, and skill checks that NPCs don’t have access to. At the same time, a character’s heirloom item and type of luck both help players define and shape what makes their character unique.

Like many potential players, Andrew was worried that he didn’t know enough about the time period and location to do the setting justice. 1450’s England was, however, quite deliberately chosen as a time and place that both exemplifies everything I love about medieval history, and also allows people to jump in without needing to be armchair historians. The game contains an authentic historical appendix for erstwhile DMs to jump into for help fluffing their campaigns, but it really isn’t necessary. The tone and atmosphere of the game is baked into the system, and simply heeding the advice that comes with the game’s rules is more than enough to create an experience authentic enough for a group of players equally ignorant of the eccentricities of medieval European history. Plus, Middenarde is a low fantasy game, not a historical fiction one, and the history books aren’t written so meticulously that you can’t slip a story of your own in the blanks.

From Andrew’s reaction, then, it seems fair to say I succeeded in making Middenarde accessible to people other than niche, masochistic, sword-obsessed nerds like myself. Yes, Middenarde is meant to be a realistic game, but it’s also meant to be a fun one. It’s likely that your characters might die, but it’s not guaranteed. Death is an effective motivator, especially when it’s permanent, and the way you treat it in your game sets expectations for the player. In Middenarde, players expect that the story can quite happily end with all of their deaths, and in fact, that would be the most likely outcome were it not for their cleverness and the favor they bring to their characters. In the world of tabletop games, seemingly every story is about skilled climbers scaling great mountains. It can be refreshing, by contrast, to play a game where it’s noteworthy if you make it up a hill unscathed, and that only makes it all the more rewarding if you can bring your character to the point where they can climb mountains, too.

If you’d like to determine for yourself how well I handle player mortality and widespread accessibility, you can purchase Middenarde here: https://www.drivethrurpg.com/

Thoughts on the touchy nature of player mortality 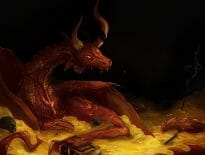