You are here: Home / Geek Stuff / Is knowing the future a gift or a curse?

When this blog has some freebies to giveaway we run a competition. You can find the latest here and check back through the archives. There’s usually a poll to answer in order to take part and then your input becomes part of a fun analytical exercise. This isn’t great science, the sample sets are small (usually less than 100) and people are often just taking part for a chance to win, but the write ups come sometimes be a bit of a talking point.

We had a copy of the anime Mirai Nikki: Future Diary – Complete Collection 1 to giveaway so we asked people whether the ability to know the future was a gift or a curse. 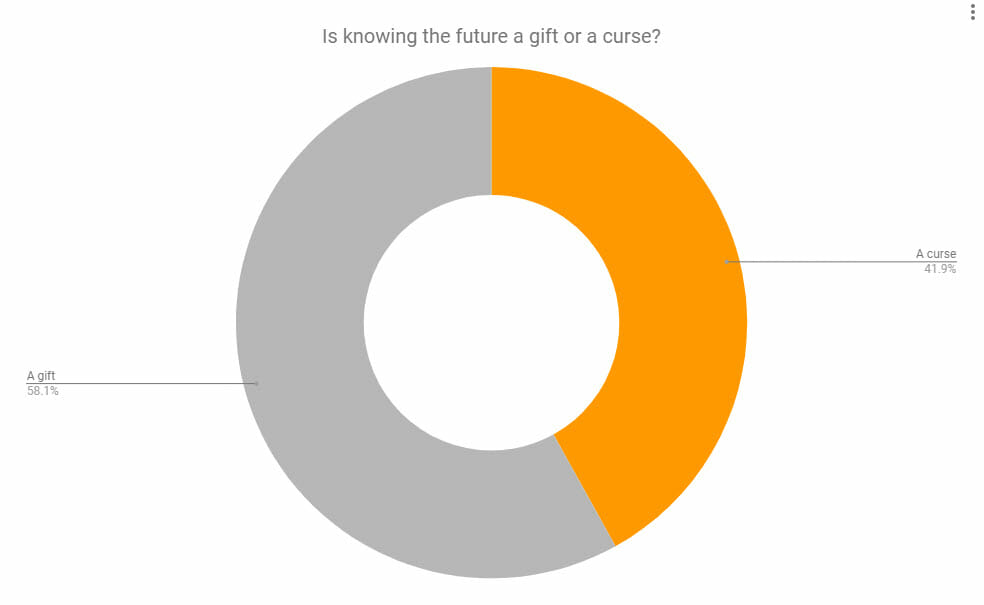 As you can see the results are pretty close. 41.9% of respondents saw the drawbacks to the ability and decided that knowing the future would be a curse. However, 58.1% of geek native readers decided they could live with the risk and saw the ability as a gift.

In this poll men were more cautious than women. 47% of women thought knowing the future would be a curse but only 35.7% of men did.

Interestingly, a similar survey published last year, that talked about prophecy produced very different results. Is this because of a poor sample size or does re-framing the question a little cause people to reconsider?

Is knowing the future a gift or a curse?

What do you think? Here’s a live poll for you to cast your vote and compare to recent readers.

Is knowing the future a gift or a curse?