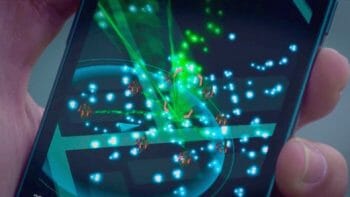 I’m a fan of Niantic Lab’s augmented reality game Ingress. Players belong to one of two teams and compete to capture portals, places of interest in the real world, and link them together to form triangular ‘control fields’.

Throughout the year Niantic organises events in which cities become centres of “anomalies” and hundreds of agents rendezvous to battle.

An original premise of the game was a bunch of lower level players could out play a higher ranked agent and yet leave enough strategy that a smaller team could out think a larger one. In fairness to Niantic I think it works well most of the time. It is weakest during the anomalies.

One of the problems this format faces in the anomaly battles are teams will often attempt to throw a control field over the city. This, after all, is the point of the game and strategic gameplay throughout the rest of the year. The catch is that a control field thrown by a few players can lock out hundreds of others during the pivotal battle.

In recent anomalies Niantic have tweaked the rules so that control fields decay extremely quickly. In effect the moderators are fighting against players attempting to play the game as it was intended.

This has helped give rise to a variant of Ingress called Shards. Shard games are used either in conjunction with a standard battle (a hybrid) game or as a standalone. Shards don’t really happen outside anomalies (okay, sometimes there are a few story point shards floating around for a plot reasons) and I’m yet to find a single Ingress agent who says “Yay! Shards are my favourite”.

In a Shard game players have to capture shards/objects that emerge from one portal and through linking portals together get them to a destination portal. Shard games tend to favour strength of numbers and aggressive play. Fielding, hacking and tactical manoeuvres play a reduced role. There are Shard strategies, though, around the best deployment of players. Unlike a fielding operation, there is little an outnumbered faction can do unless their opponents make a mistake.

It’s hard to second guess the game designers at Niantic without access to their data but here are a few suggested alternatives, in summary, to Shard battles.

Concept:
Each side has a portal that will ‘eat’ any control field thrown over it. This happens once a minute every minute. Small fields are eaten for no return. Larger fields, say over 500 or 1,000 MU are worth a point. BAFs (those city sized mega fields) are worth more.

Why this works:
Field Eaters can be seamlessly worked into a cluster battle and reward core Ingress fielding skills. They add a tactical element to capturing portals around the battle. Vitally, they ensure there won’t be fields over head for all of the anomaly.

Variants:
The field eating portals could be volatile and bounce around the battle area or there could be more than two. Equally, field eaters could consume both Resistance and Enlightened fields, only one or for whichever faction does (or does not!) control the portal.

Concept:
The Command Channel is a new addition to Ingress and uses the glyph hacking interface. Hacking is a key part to Ingress but poorly represented in the anomalies. In a Command Channel Decryption battle agents receive glyph sequences via media units from hacks in the battle area. These agents then need to race back to the main Decryption portal and enter the revealed sequences in the command channel interface. The task is done when the Decryption portal has received all the required commands, correctly glyphed.

Why this works:
This is core Ingress game play. The strength in numbers issue is mitigated, somewhat, by the fact that portals belonging to any faction can be hacked. Equally, portals burn out for individual players after 4 hacks unless hack mods are deployed. This battle is not affected by fields and would integrate well with any other battle type.

Variants:
A single Decryption portal could last the entire anomaly without burning out. The media modules could come from only the correct colour portal or be coded to only one particular Decryption portal (would that create a booming battle ground trade of media).

If this use if media modules is interesting then imagine them being used as the occasional reward to successfully completing Missions in the real game. Media modules that contained passcodes to unlock rare gear. Concept:
Cluster portals flash brightly with XM energy during the anomaly and those bursts travel down the link network, jumping again if they reach another fully resonated and linked portal. Points are scored based on the number of portals reached.

Why this works:
This approach mixes the standard cluster battle with shards and yet could still compliment either. Factions with fewer players have strategic options around helping the pulses escape the immediate area and to portal areas elsewhere with a high density of linked portals. This format is especially friendly for players turning up at the last minute to the anomaly and not in teams.

Variants:
The length a pulse will travel could be restricted based on the level of the origin portal or on other metrics designed to balance the game. For example, Enlightened pulses might only travel a few hops in an area dominated by green portals. Fields might negatively affect the number of pulses emitted from similarly aligned portals during the encounter and this would make any BAF a difficult risk to calculate.

An interesting combination would be to have a specific event trigger a pulse – such as a Command Channel hack or special mod deployment.

Concept:
The anomaly has actually disrupted the normal XM layer and portals have become unstable. A new weapon type, the Stabiliser, is used in a similar way to ADA refractors and Jarvis viruses. The effect of using the Stabiliser on an unstable portal of the opposite faction (frequency) is to stabilise it. Using the Stabiliser on a portal of the same faction will unstabilise it. Points are scored for the number of portals captured and the number of portals stabilised.

Unstable portals are erratic and randomly may omit XMP blasts which damage nearby resonators, change frequency (faction or grey), drop or establish links.

Why this works:
This approach evens up the battle when there is a discrepancy in numbers. The out-numbered faction has the decision whether to stabilise the larger number of enemy portals, thus scoring points, but reducing the chances of the random instability working in their favour. Equally, the other faction isn’t passive in this and can undo the portal stablisation work at the cost of pulling agents off portal capture operations.

Variants:
Failure to stabilise portals could have consequences as more unstable portals appear for the next cluster, at related anomaly sites on the same day (perhaps through the satellite / main relationship) or for the following events. Anomalies may require a certain number of portals to be stabilised to be considered successful.

The Stabiliser item could be added to standard gameplay or be restricted to anomaly times/locations (as a reaction to the instability or other easily conceived plot reason).

Geek Stuff The Most Impossible Quest…

Geek Stuff Yennefer of Vengerberg cosplay
💰 Copper Coins 💰 Geek Native is an affiliate and may earn commission on purchases you make from third-party sites.
🍪 Privacy & Cookies 🍪 The site uses cookies to survive. By accessing the site, you agree to use your browser to control cookie use or take 1d4-3 privacy damage (tracking). If you defeat cookies via ad blocking, please consider the Patreon. An intro to cookies, and how to control them, can be found here.
I Manage Cookies