You are here: Home / Books / Comics / Say goodbye to your sanity: A review of FutureQuake 28 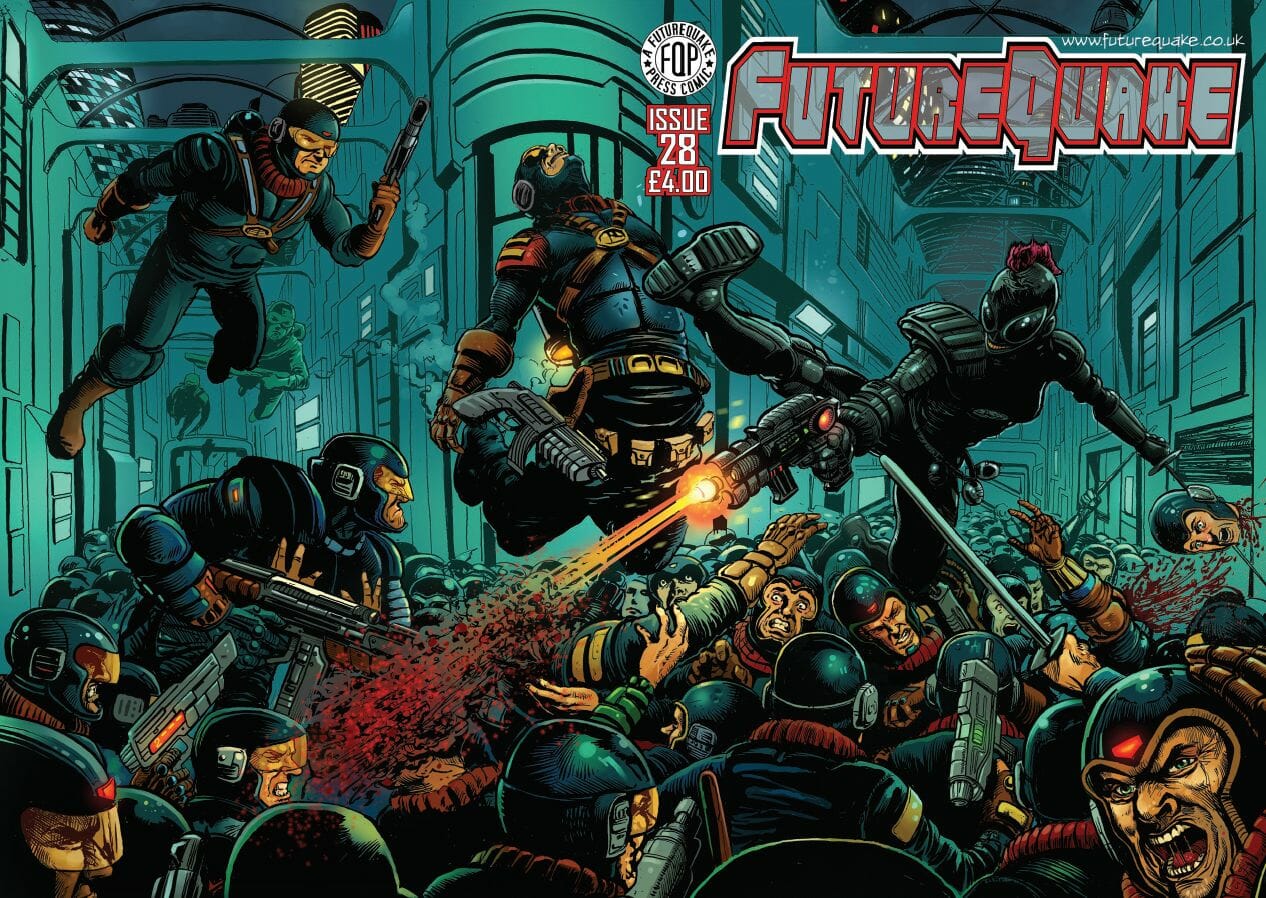 A friend tipped me off to FutureQuake, providing a copy for me to look at and muttering about 2000 AD.

I was happy enough to take a look. I’ve no shortage of comic books to read but I always try and make time for recommendations. I was surprised at Future Quake. It was much better than I expected.

FutureQuake is an anthology of sci-fi. Issue 28 starts off with a revolution cleverly written by Mike Yeoman while Steve Austin’s art does ooze 2000 AD (although those badged helmets might just be rather suggestive of a certain other future city).

Dave Cook and artist RH Stewart put together what should be any computer gamer’s nightmare in The Final Boss. Trapped in a groundhog day style loop as a game is played over and over again would be enough to annoy most people.

With Cop Killer, writer Tim Perry and Joe Palmer, give us a gritty thriller. An Usual Suspects ending? There’s certainly a twist.

Jonathan Harris along with artist Wesley St Clair put together a punchy short with Monitors. Are the rumours about the new inmate true?

We go to war with the UK thanks to JJ Robinson and Alex Paterson in The Gods Tear. It’s going to get messy…

… while Blas Bigatti and Adam Caudill serve up a political mess in Peaceful Farewell. Some of those politicians look awfully familiar.

Barry’s Nose is a weird one. Writer Rory McConville and artist Scott Twells serve up a comic script where the opening character has a boot for this nose. It’s all thanks to his alien heritage.

Wanted is a western with its own deadpan twist as Marcello Bondi shares some sardonic humour.
Artist Neil Sims’s illustration style is really thick, lots of black and shadow, but it suits Virgil Yendell’s writing in Orionid, especially with that ending.

The Long Sleep from Robert Lefebvre and David Valente is a little hard to read because it’s in landscape orientation compared to everything else – but stick with it. Worth it.

Lastly, Old from Michelle Wilkinson and AI Miller touches on health sci-fi I suspect we might not be a hundred years from ourselves. That’ll make you think.

That’s a lot of stories, huh? There’s just under 50 pages in FutureQuake 28 so it’s safe to say that none of the many stories inside mess around. They’re quick hitters. That doesn’t detract from the anthology – I think it empowers it. If you don’t like one story as much as the others then you still have all the rest.

Sci-fi fans, especially 2000 AD readers, should pop over to FutureQuake’s shop and take a look.

My copy of FutureQuake 28 was a freebie.

Say goodbye to your sanity: A review of FutureQuake 28