You are here: Home / TV / Doctor Who leak: The Eleventh Hour will be 60 minutes long…

At the start of the month we discovered the first two Matt Smith Doctor Who episodes will be called The Eleventh Hour and The Beast Below. Radio Free Skaro seems to have got their hands on a BBC press release that has even more details.

First off – if you’re worried about spoilers, stop reading, go click on an an ad instead!

I subscribe to the official BBC press release RSS feed and have seen no such announcement. I also know, from experience, the embargoed press releases do go live on the BBC site and if you can guess the URL then you can get access to the news. It is entirely possible that Radio Free Skaro has the facts straight.

Amy Pond, that’s the companion played by Karen Gillian, is described as “enigmatic”.

Places the two will visist include 16th century Venice, France in the 1890s, the United Kingdom in the far future and a new nation floating in space.

Hmm. Venice in 1500s? I wonder if we’ll do some rooftop scenes. Assassin’s Creed II meets Doctor Who would be quirky!

The trailers have already shown us that the Daleks will feature. Now we know that they’ll appear in war-torn London in the 1940s.

We’ll have alien vampires, humanoid reptiles Weep Angels, a Star Whale and a silence menace that follows Amy and the Doctor where they go.

There have been reports that the Silurians will be back for this series. That could explain the humanoid reptiles. The Star Whale sounds ever so slightly Hitchhiker to me… but most interesting is this stalking silence. How Moffat is that. I wonder if it’s related to the enigmatic Amy rather than the Doctor.

Doctor Who leak: The Eleventh Hour will be 60 minutes long… 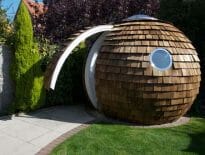