You are here: Home / Games / Tabletop & RPGs / The Old Made New Again: A Review of the Lone Wolf Adventure Game

When I was a kid, I was an adventure book hoarder. I had an entire booksh 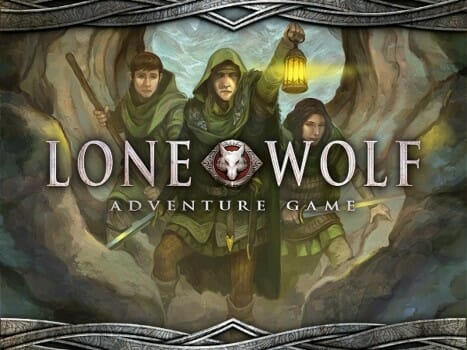 elf full of them. Every day, before I got on the bus for elementary school, I’d take this small black briefcase and fill it with adventure books and bring it to school. I was running a one-man lending library right out of that briefcase.

Of all the adventure books, though, Lone Wolf was far and away my favorite. Because unlike a lot of the other adventure books that simply relied on the novelty of their format, Lone Wolf created an entire fantasy world, with each book in the series being the next chapter in a sprawling, epic campaign. I played them again, and again, to the point that I had worn out the first four or five books in the series.

I know I’m not the only one who has such a strong childhood attachment to these books, and apparently, Cubicle 7 knows this, too. The Lone Wolf Adventure Game, co-written and co-designed by series creator Joe Dever, is a boxed set RPG that fully explores the setting of Magnamund, home of those adventure books of old. You can be generating your own Kai Lords and battling evil across the land in no time at all. In fact, the game comes with a “learn as you play” adventure, similar to the beginner boxes of Fantasy Flight’s Star Wars RPGs, so you and your group could be playing the Lone Wolf Adventure Game within literally minutes of cracking the box open.

Speaking of Fantasy Flight, Cubicle 7 went along the same route that company tends to go on and with Lone Wolf has delivered a truly gorgeous and colorful game, with a box stuffed full of cardboard bits that make the game almost feel more like a board game than a tabletop role-playing game. The art and design within the pages of its three books is evocative and, for lack of a better word, beautiful. This should come as no surprise to anyone familiar with Cubicle 7’s work, however; this is the same team that did The One Ring, afterall. The downside, of course, is that the game is almost laughable in PDF form, consisting of 18 files. This option is nice for study ahead of play, but should you bring Lone Wolf to the table, you’re going to want the actual box.

Although the Lone Wolf Adventure Game is written and designed as an onramp into the hobby of tabletop RPGs, the designers never forget the series’ roots. There is some potent nostalgia within the pages of this game. The Kai Disciplines that new characters begin with are pulled straight from the old books. Inventory is handled as a number of slots in your backpack, just like in the books. Characters have to keep track of meals and take damage if they can’t eat, just like in the books. There’s even a random number chart inside the box that players can flip tokens on to generate numbers, just like in the books!

That latter example right there also happens to point out a weakness in The Lone Wolf Adventure Game. Its reliance on the nostalgia/popularity of the books results in a game where a lot of the content is ineffective at the least, and silly at the worst. The random number chart produces numbers between zero and 9…and exact same spread as a ten-sided die, one of the most common RPG dice in the hobby. The game’s designers know this, and repeatedly mention in the text that “using a ten-sided die might be easier.” So intent on capturing the Lone Wolf experience, the game is actually hampered by it in spots. Having an eight-slot backpack may be fine for an adventure book, but RPG gamers are either going to want something more robust, or they’ll simply handwave carrying capacities and endurance. Though new gamers may forgive these design concessions, gamers brought in under the nostalgia card are going to be disappointed once that nostalgia wears off.

Being in that latter camp, I question the design decision to slant The Lone Wolf Adventure Game so squarely into “Welcome to RPGs” territory. The One Ring, based on an even more popular franchise, did not go so far and it was one of last year’s best games. Lone Wolf, with its colorful boxes organizing rules into “Basic” and “Master” categories, seems like it caters unnecessarily hard to beginners. Afterall, players coming to Lone Wolf from the books should already have a more fundamental idea of what a role-playing game is than most, anyway, so why try so hard? As a result, I found reading passages of Lone Wolf simply boring. The clear, concise language of The One Ring is still here, but it’s buried under a lot of hand-holding. I think a more straight-forward approach that emphasized the world of Lone Wolf instead of the mechanics of its adventure books might have been more interesting, and more useful, in the long run.

Still, though, the original setting, high production value, and high approachability make The Lone Wolf Adventure Game a solid, playable game, one you’ll likely not regret picking up, even if it’s just to revisit that venerable adventure book series.

My copy of Cubicle 7’s Lone Wolf Adventure Game was provided for review.

Did you play the game? I got this game for Christmas, but have been able to find a review any where of a person that has played with a group.

The Old Made New Again: A Review of the Lone Wolf Adventure Game