You are here: Home / Geek Stuff / Back from the Dead: A Review of Chill, 3rd Edition 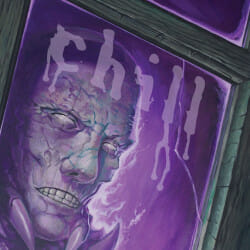 slipped through the cracks, an unfortunate casualty in a hobby where only a few big names dominate the hobby’s attention. For many, that game was Chill, a horror RPG first released in the mid-80s. Overshadowed in the 80s by Call of Cthulhu, a second edition was released in the 90s, only to get overshadowed by the World of Darkness, instead. Now, in 2015, Chill rises again for its third edition. Though there are still plenty of great competitors out there, including new editions of both World of Darkness and Call of Cthulhu, Chill’s latest edition has all the depth and quality to go toe-to-toe with either of those games…and even out-perform them, in several key areas.

Unlike CoC, where the players are more-or-less regular people, or World of Darkness, where the players are typically some kind of monster, players in Chill (called envoys) are heroes in a world that casts long, dark shadows. Gifted in supernatural abilities called the Art, envoys in Chill risk their lives fighting vampires, werewolves, ghosts, and other horrors, collectively called the Unknown. PCs in Chill work for an organization called SAVE, a centuries-old order devoted to fighting back the darkness. Chill takes a very modern spin on its campaign/character design; during character creation, the group’s SAVE headquarters (HQ) is also established, and its during this time that the GM (called the CM, or Chill Master, perhaps the coolest name for the role ever!) interacts with the players and establishes the exact details of this organization and the world the players inhabit. Unlike many of its horror contemporaries, Chill is very flexible in the way the world can be used. SAVE can be a brooding, modern shadow organization, reminiscent of the government conspiracies of the X-Files, or it can be an ancient, esoteric order straight from Buffy the Vampire Slayer. Though there are specific story details on SAVE, right down to key heroes, events, and locations throughout the organization’s history, the importance of these details are very much in the hands of the group, and can be as vital or trivial to the campaign as needed. This excellent, flexible design runs all through Chill, making it one of the most versatile horror RPGs I’ve ever read.

Chill’s flexible and progressive design carries through to its mechanics, as well. The core of the gameplay revolves around Light and Dark tokens that represent the ever-lasting tug of war between good and evil. Players turn Light tokens to the Dark side to activate the Art, modify dice rolls, or absorb damage during the game’s brutal combat encounters. The CM turns Dark tokens to the Light side to do the same for NPCs. Both sides can also use these tokens to make minor but effective edits to the narrative to adjust the flow of the game. This level of meta-gaming introduces a very interesting level of resource management to an otherwise straight-forward game. Chill isn’t the only game using a system like this…Fantasy Flight’s Star Wars games use a very similar mechanic…but unlike that game, the Light/Dark token system of Chill is a very important part of game balance and theme; it’s not just a fun little mini-game.

In another modern innovation, characters in Chill have a Drive and a Takeaway System. Both Drives and Takeaways work vaguely similar to Aspects in Evil Hat’s Fate Core; essentially, players can tap their Drives and Takeaways as “free” Light tokens. Drives are the character’s motivation to fight evil; Takeaways are lessons learned in pursuit of their Unknown enemies. Characters can have up to three Takeaways and a single Drive; however, additional Takeaway slots can be purchased with experience points. This creates a layer of player progression not often found in horror RPGs, and makes every case survived by the players that much more rewarding.

The rest of Chill’s mechanics boil down to a percentile “roll-under” system, similar to Call of Cthulhu. Envoys have a number of characteristics, skills, and specializations, as well as specific powers within their chosen Arts, called disciplines. Success and failure are measured by how over or under the players roll against their characteristic, and modifiers to rolls are applied to the number being rolled under, not the dice roll itself. Combat, as mentioned before, is brutal, and there’s a workable system handling madness/horror, as well. All the various mechanical bits give Chill a slight but not insurmountable learning curve.

All of this solid craftsmanship is complemented with an attractive and eye-catching design. Chill’s sub-300 page running length is dense with material and aided with fantastic artwork that gives the game a unique aesthetic that helps further set it apart from other horror games. A fine example of this can be found right in the opening pages, with a comic-book intro reminiscent of horror books like Locke & Key. The writing in Chill hits a refreshing tone, lighter than World of Darkness or Call of Cthulhu, but not as cheeky as The Dresden Files. Supporting this mindset is one of the best “How to GM Horror” sections I’ve read in recent memory, complete with a step-by-step guide to making your own mysteries, custom-building monsters to challenge your players, and a very thoughtful section on communicating the intensity level of horror with your players to create a compelling, exciting game for everyone. For this reason, Chill is an unlikely-but-welcome candidate for a GM desiring to run his or her first horror RPG.

Chill carries all the quality of its contemporaries, but considerably less baggage, making it a game that, even though it is technically almost 30 years old, feels fresh, innovative, and interesting. The deep array of abilities and options player characters have for development, as well as the collaborative nature of its world/campaign design, makes Chill one of the best…if not the best…option for a long-term contemporary horror RPG on the market today. I am not terribly familiar with the previous iterations of Chill, but if the quality of its predessors is anywhere near the outstanding value of this third edition, then it was an absolute shame that this game ever left the public eye. Chill is a more than worthy addition to your tabletop arsenal, whether you’re new to pen-and-paper horror, or a grizzled veteran of managing sanity points.

My copy of Chill, 3rd edition was provided for review.

Having Pacesetter’s iteration, and having peroused the text, I can safely state that most of 3rd Ed is copy n paste from that one.

Back from the Dead: A Review of Chill, 3rd Edition

Geek Stuff Like a Phoenix – The D&D inspired sale…