You are here: Home / Games / Tabletop & RPGs / Back for the Fourth Time: A Review of Earthdawn, 4th Edition

(Note: this review is based on the Kickstarter release of Earthdawn’s fourth edition, which is not yet commercially available. Links to Earthdawn in this review refer to the first edition of the game, released in 1993). 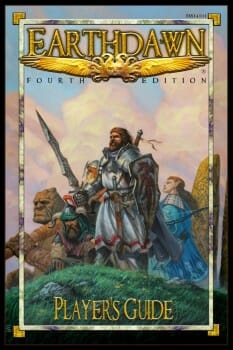 In my high school years, FASA’s Earthdawn was one of the defining games of my roleplaying hobby. An awesome setting that deftly combined the traditional with the original, Earthdawn was a deep, crunchy fantasy adventure game that not only didn’t carry any of D&D’s baggage, but brought its own unique, fascinating world to the table. In the years since the game’s inception, the world of Barsaive became a bit lost under the shadow of the d20 Dynasty. Last year, however, it re-emerged via Kickstarter with a bold new plan for a 4th edition of the game. I eagerly backed it, and just finished reading through the finished pdf of the Player’s Guide, the first corebook in the game’s new edition.

The basic premise of Earthdawn is this: the world of Barsaive experienced a sudden swelling of ambient magical energy, enough to attract the attention of the demonic Horrors. These Horrors invaded the world in an orgy of chaos and destruction known as the Scourge. The civilized races of the world hid in magically-sealed underground bunker-cities called kaers, hoping to wait out the storm. Many of the kaers were breached and destroyed by the Horrors, but many more persevered. At the time the game begins, the magical levels of Barsaive have receeded, and most (but not all) of the Horrors have left. You play as heroes exploring the post-Scourge world, searching abandoned kaers, getting caught up in the political wrangling of competeing factions trying to re-establish control of the world, and of course slaying wayward Horrors who aren’t quite done terrorizing the land you call home.

Because of the game’s affiliation with FASA, as well as certain recurring themes, Earthdawn has been crudely described as “medieval Shadowrun.” Indeed; previous editions established that the two games existed within the same universe; however, as licenses to the franchises have changed hands over the years, the canonical link has eroded. Crude as this description is, it is not entirely inaccurate. The game carries a lot of Shadowrun’s signature style…traditional-but-stylish takes on the various fantasy races and classes, a whole “world-within-a-world” in the Astral Plane, and a highly-detailed setting who’s surface is barely able to get scratched in this corebook’s 400+ page running length. Gamers who love the style and substance of Shadowrun will feel right at home with Earthdawn. This game is an easy recommendation to them.

However, Earthdawn also has many of the same issues that its sci-fi sibling carries. The rules are complex, almost needlessly so, at times. The core of Earthdawn’s mechanics is a “step system;” almost every stat has a “step.” Each step translates into a dice pool that is rolled against a difficulty number. The design intent is clear enough: modifiers to various actions result in adjusting the step, rather than applying math to dice rolls, so that the fundamental mechanic is always dice-versus-static difficulty, rather than modifiers fudging up all the variables. This gives the game plenty of crunch without being too unwieldy. Frankly, however, the game is still pretty damn unwieldy, especially when compared to the current flagship of the genre, Dungeons & Dragons. Earthdawn, like any good game over the span of several editions, has sharpened, clarified, and streamlined its rules this time around, but the game is still at its core very “crunchy,” and gamers who dislike that kind of complexity may find it an insurmountable hurdle in Earthdawn.

This depth of design extends to the setting, as well. Modern setting-intensive RPGs like Numenera or The Dresden Files tend to keep the details fast and loose, so there’s plenty that can be adjusted and fine-tuned to the tastes of a particular group. Earthdawn’s world of Barsaive, however, is very “old-school” in its presentation; highly detailed with a rich history that practically screams “there WILL be sourcebooks!” Of course groups are welcome to detail Barsaive as they see fit, but Earthdawn is far-less encouraging of such practices than its contemporaries.

All of this adds up to a game that isn’t quite as mind-blowing as when it made its debut back in the 90’s, but there’s still a lot of rich content here to mine for some great adventures. Fantasy fans, in particular, who want a fresh take on the material should not hesitate to pick up Earthdawn, as well as Shadowrun fans who want to see that creative energy in other genres. The story-gaming crowd can safely avoid this one, but for anyone who enjoys some dice-chucking and solid world building, Earthdawn is most-certainly worth looking into.

Back for the Fourth Time: A Review of Earthdawn, 4th Edition

Tabletop & RPGs 12 reasons why silver hurts werewolves
💰 Copper Coins 💰 Geek Native is an affiliate and may earn commission on purchases you make from third-party sites.
🍪 Privacy & Cookies 🍪 The site uses cookies to survive. By accessing the site, you agree to use your browser to control cookie use or take 1d4-3 privacy damage (tracking). If you defeat cookies via ad blocking, please consider the Patreon. An intro to cookies, and how to control them, can be found here. I Manage Cookies