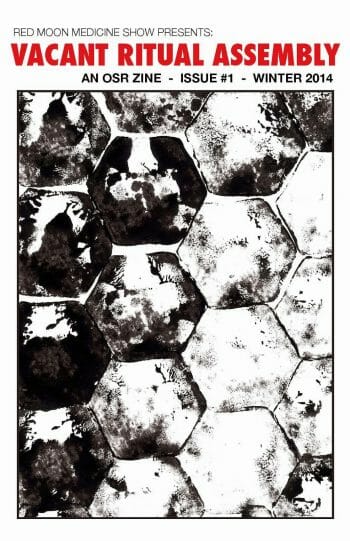 When you’re designing a tabletop roleplaying campaign (or even just an adventure), you’ll always find yourself sketching or noting something that never makes it to the table. The nature of preparation often means you frankly over-egg the pudding. Even low prep GMs might find, after a while, that they have scraps of paper filled with cryptic suggestions, names, encounters and other creative detritus.

What if you could do something with all those ideas?

In most games, the players move on – and often that means the ideas you had don’t fit any more. Maybe they had such a dependency on locale or a particular non-player character (now deceased) that nothing would lead you back that way again. What can you do?

Well, why not pull all those notes together, tidy them up and present them for the attentions of a willing gaming public?

Form
Vacant Ritual Assembly – Issue #1 is a digest-sized print magazine or PDF, presented mostly in black-and-white, with some spot colour in the title on the cover. Written by Clint Krause and published under the banner of Red Moon Medicine Show, it runs to 22-pages for this first issue.

The magazine has a clean and modern format, with very readable text presented in a two-column format. VRA includes scattered artwork of variable quality, adequately supporting the text. Several artists means very different styles and finishes, some that work better than others.

You can purchase the magazine in a print version, or download it as a Pay What You Want PDF from various sources. The review covers the latter electronic version.

Features
There’s something strangely inviting about a magazine that sells itself as the creative run-off (or possibly overspill) from an ongoing campaign. Given that Clint Krause is running a weekly game and produces more than enough material to fill it, within Vacant Ritual Assembly lie both the discarded “don’t needs” and the well-worn “have used” materials.

While one might be led to consider whether this means VRA comes chock-full of unwanted scraps, I would suggest having read it that this isn’t the case. In fact, if that is the case then Clint’s weekly game must be bordering on the rather awesome.

This inaugural issue of Vacant Ritual Assembly features a location, three non-player characters, an adventure and an interview with Into The Odd creator Chris McDowall.

The interview, to deal with that first, asks a few questions of Chris around the development of Into The Odd – and you can click that link to see our own Geek Native review of that game. It’s interesting to get a perspective on why Chris took such a stripped down approach to the game and how that has guided his hand along the way.

Greycandle Manor is interesting, as it’s a blank inventory sheet and numbered map of a building from Clint’s game. He created the handout for his players to complete after they purchased the empty (and creepy) old building in-game. I like that idea of getting the players involved and engaged by having them give some thought to kitting out their new purchase. Given the mad dash for the best bedroom you can get when people share a chalet for a weeks holiday, I dread to consider the arguments that might ensue…

Brahnwick is Dead fills 6-pages, the single longest piece in this issue. An open adventure location, it includes three full page maps, one intended for players and the rest for the GM.

Oddly enough – as comments go – I liked the numbering used for these maps. As it starts on the area map, then drops into the individual locations. So, number 2 on the area map is a farm. When you look at the location, it has four rooms, numbered 2, 3, 4 and 5 – then 6 jumps back up to the area map. Anyway – it seemed like an entirely suitable and interesting approach that I found worthy of note!

The adventure includes two pages outlining the content of the map locations, including boxed non-player character stats. Each location, or room, has notes on content, treasures, adversaries, saves and so forth. In practice, the area provides something of a sandbox that Clint has used on two occasions, with a different purpose drawing characters to the area each time.

Now that I’m writing this, I feel I have to throw a reservation at the use of the word adventure. Brahnwick is Dead is a bit of a focus-free sandbox with an interesting issue and several possible of targets for character interest. No specific purpose for a visit lies therein – that requires some creative input from the GM or the visitors.

Luminari, Lady of the Golden Lamp is a single page encounter, with a bit of history, background, stats, and an explanation of how Clint used it in his own campaign. I liked that bit, because it game the Lady a reason to exist – as little more than a throwaway comment that became something more when the opportunity presented itself.

The final three pieces interlink. Vespero the Antiquarian, Meet the Skinsmith, and The Ghoul Market group together, as the first two occupy – or at least frequent – the final. It warrants mentioning that Clint runs a Lamentations of the Flame Princess campaign, so the people and places have a dark and twisted edge about them. Those who favour high fantasy and sweet dreams need not apply.

The Ghoul Market forms an unsettling backdrop from the darker end of town, where creatures who feast upon and favour things dead and fetid gather and exchange the unsightly, unpleasant and unwanted. You don’t visit the Market as a matter of course, unless you want to end up as main course for one of the traders. However, with the right permissions or patronage, you can find rare treasures and delicacies, terrible secrets and gruesome services.

The Skinsmith, for example, offers resurrection and restoration with a fiendish and sadistic twist. Whereas, Vespero cultures a wealth of weird and inscrutable benefactors, willing to pay good money for the acquisition of obscure and unattainable curios.

The Ghoul Market is a twisted and terrible place, but I can see it working outside the realms of dark fantasy, whether in some misbegotten Parisian suburb of the Belle Époque, the shadowy alleyways of Tanelorn, or the nightmare quarters of Carcosa.

Final Thoughts
Vacant Ritual Assembly provides a first glimpse of an inundated campaign world and the creativity of an enthusiastic Gamemaster. While not suitable for everyone, the ideas herein can easily drop into any adventure as a chance encounter or a fast hushed rumour.

This sort of content and presentation has increasingly made appearances on sites that support small publishers or that nurture creative endeavour – like RPGNow and Patreon. Given the Pay What You Want price-tag, you have nothing to lose in giving Vacant Ritual Assembly an experimental read. However, I thoroughly recommend you offer some gesture and pledge your interest in more to follow, as this first issue shows a great deal of promise.

Lurid Tales of Darkness: A Review of Vacant Ritual Assembly 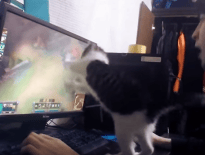 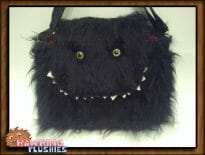