You are here: Home / Books / Man meets Intelligence: A review of On The Steel Breeze 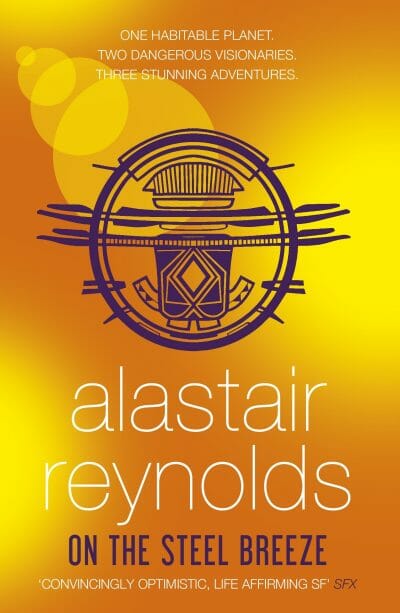 On the Steel Breeze

Don’t make the same mistakes as I did with Alastair Reynolds’s sci-fi. Despite the mermen and the ghosts I found the start of “On The Steel Breeze” to be quite slow. I wasn’t paying full attention when a few small paragraphs described how the main character Chiku divided into three identical copies and decided to go on three different adventures.

One Chiku was tasked with staying home (on future Earth) and keeping safe. One Chiku took the biggest risk and set out on a spaceship after their famous pioneer of a grandmother and the last Chiku decided to go on a colony ship towards the planet that might herald the future of mankind. This planet is known as Crucible.

On The Steel Breeze isn’t a collection of three stories; it’s one story that features the three Chikus. At times you need to pay attention to follow where the narration is at.

The backbone of the story is the trip to Crucible and what happens when people get there. Huge colony ships, carved out of asteroids, hold millions of people. Each ship is slightly different as mankind experiments with different cultures. The lucky simply get to “skip over” and enter a cryo-sleep of some sort and awake near the end.

There’s a problem. In the early days the colony ships decided to burn more fuel than they should have, to travel faster and get to Crucible sooner. The catch is that it means they don’t have the fuel needed to break. The colony ships might simply sail past the Crucible and continue their long journey out into space for ever.

Imagine all the political tension that begins to boil as scientists on the ships continue to fail to find a way to apply the breaks. This is the background to On The Steel Breeze.

Since I was whizzing through the text too quickly, wondering whether I’d continue with On The Steel Breeze or whether Reynolds’ vision of the future was too advanced for me, I missed the key set up points. Not only did I struggle to follow which Chiku the plot had gone to – or rather, I was side-balled by the change – but I wasn’t putting together the importance of the foreshadowing.

In the end I enjoyed the best part of On The Steel Breeze. I had a business trip with two flights and a long night in the hotel room. That gave me the time to knuckle down and pay proper attention to the sci-fi in all its cleverness. I’m glad that happened because I enjoyed the bulk of the book.

Alastair Reynolds has a futurist vision. My gut feeling was right; smart minds are worth exploring. I could have set aside the sci-fi but I knew it was worth finding a way to commit some focus too.

I have a grump, though. After I messed up the beginning and the book helped me to rescue the middle – the ending feels a little spoilt. Sure; we get an ending but we don’t know why events unrolled in the way that they did. There are intelligences at play that the reader knows about but doesn’t understand. When these intelligences reach into the plot and make sweeping changes we just have to accept it. I felt a little short changed. After committing to the book, after a battle, I wanted more.

I’ve thought hard about whether I’d recommend On The Steel Breeze or not – and if so; to whom. I would recommend it. It’s well written, clever and if you pay attention at the start then it’s engaging. Ultimately, I think you need to have some experiences of sci-fi to really appreciate Alastair Reynolds’ work. If you’re a noob this may be too much of a journey for you.

In the end I enjoyed it. I’d recommend On The Steel Breeze to my well-read geeky friends.

My copy of On the Steel Breeze was provided for review. The book is published by Gollancz and has been available to buy since October.

Man meets Intelligence: A review of On The Steel Breeze

Tabletop & RPGs Matt Forbeck and what’s next for Shotguns …