You are here: Home / Games / Tabletop & RPGs / The Road Goes Ever On and On: Review of Into the Violet Vale 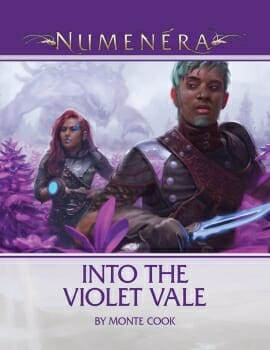 Into the Violet Vale on RPGNow

Into the Violet Vale is a straightforward adventure supplement for Numenera, written to play at a convention or as a basic introduction to the game. The adventure was run in official GenCon 2014 Numenera events and you can now purchase and download it in PDF format.

Form
Into the Violet Vale is a 25-page adventure supplement, written by Monte Cook for Numenera. It features an adventure, running to 10 pages, with the remainder of the supplement mostly taken up by six pre-generated characters.

The adventure uses the familiar format of the range, with three column pages – two main columns and one marginalia, containing notes, GM intrusions and cross-references to the core book.

The artwork for the adventure matches the style of the core. Actually, there isn’t much to see – but when you have limited space, that’s a good thing. The art offers a view of characters in the Vale, a key non-player character and her assistants, and two maps of the area.

Features
Numenera continues to have an elusive quality about the setting and the Cook vision therein, so any supplement that offers a little more insight or context is welcome. Into the Violet Vale provides a slim and fairly straightforward adventure. In terms of fresh insight, it has only enough time for a fleeting visit and doesn’t offer any new material. However, it does offer a slice of adventure in the style Monte intended Numenera to play out.

The convention version of the adventure has a single, severe hook that makes the in media res start entirely understandable. The group has a job to do and unless they do it those they love or value will suffer. For the purposes of an ongoing game, this might be too brutal an approach – in which case the text has a couple of other ideas to offer. In reality, the nature of the Violet Vale means that this can easily be a ‘stumble upon’ encounter without need for a hard sell.

The characters start the adventure halfway through their task, in possession of a prisoner and on the homeward leg towards their ‘reward’. However, after an initial encounter at an abandoned camp site, the characters rapidly realise they’ve entered the Violet Vale.

Once in the Vale, it proves something of a trap and the only way out means getting involved. The Vale exists in a state of temporal and physical flux, which means you can have a Back to the Future/Bill and Ted moment or three. The opportunity exists to confuse and bewilder the players and characters, dangling the character of discovery before them before sweeping it – or them – away, only to dump them with a dire threat instead.

Something nasty has become trapped in the Vale and it isn’t enjoying the experience. The characters serve as a distraction for it – a meal at least, if not an actual challenge. However, the predator is not alone – another inhabitant occupies the Vale and they don’t appreciate the visitors at all. A deal must be struck and with it, the opportunity for escape.

The adventure provides some thoughts and guidance for the GM, but pretty much sets out the sandbox elements and sets you running. In a convention environment, this works fine. The adventure has a stripped down feel and some key elements, without enforcing a linear approach. Depending on the nature of the characters, the focus of the players, and the state of their preparedness, this could be anything from a bloodless investigation to a total party kill.

Throughout the adventure text it provides some handy hints on timing – which would prove beneficial for convention play. At key points it either highlights how long you should linger on something before moving on or indicates the latest point at which you should get somewhere to ensure you have sufficient time to conclude. Valuable stuff.

The pre-generated characters offer you the Tier 2 version of those first seen in the adventure Vortex. The characters use the stylised character sheet found in the core rules and include some basic background information with blank spaces to insert the name of other characters to form relationships.

Final Thoughts
Into the Violet Vale provides a very straightforward and simple adventure with a fairly linear plot-line, but a possibility for more open play. The GM can choose to make the environment as wild and confusing as time and situation allow, or keep the events tight and focussed. The real adventure will come from how you play, the interaction of the characters, and the web of motivations found in their relationships. To mix things up, the key non-player characters have some pretty simple intentions, none of which benefit the PCs.

For the price, the value comes in having an adventure you can use at the drop of a hat with a complete set of pre-generated characters. If you own Vortex as well, you could even play them at a convention in consecutive slots with the same players – using the Tier 1 and 2 versions of the characters to provide some immediate progression.

In an ongoing campaign, the Violet Vale would have potential as a place for a return trip under better circumstances. Once the characters have resolved the situation and returned their charge to release loved ones, they might use the Vale as a stepping stone to new adventures or explore to find what else the place has in store. Who else got caught there and what might they have left behind?

On the other hand, the adventure also throws up some interesting non-player characters and factions that might make return appearances. Whether or not the characters return their prisoner, they will make enemies of one kind or another…

My copy of the adventure was provided for review. Into the Violet Vale, Monte Cook, Monte Cook Games, PDF format for $3.99 on RPGNow.

The Road Goes Ever On and On: Review of Into the Violet Vale 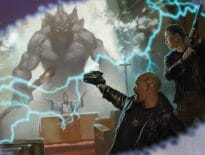 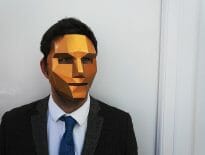