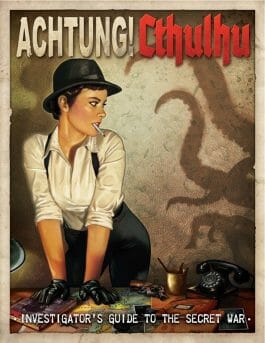 Alternate worlds provide heady potential for gaming groups. With a little knowledge and a wealth of imagination, you can turn something commonplace in an extraordinary gaming experience. Sometimes, those experiences go to dark places, but then we need to show some respect and understand the difference between reality and the fictional world. When it comes down to it, medievals times had plenty of disease, malnourishment, and abuse going on… but we don’t tend to dwell on them when dungeoneering.

Over the last ten years, interest in Lovecraft’s fiction centred on the Great Cthulhu and his kind has blossomed like a semi-sentient fungal monstrosity. No one could have imagined anytime but in the most recent years of the last century (Lovecraft wrote his first tale of cosmic horrors around 1917) that his creations would be immortalised as card games, slippers, soft toys or other light hearted paraphernalia. If you’re writing something in gaming at the moment that doesn’t at least stretch to an unofficial Cthulhu expansion or supplement, you’re missing a trick.

Achtung! Cthulhu takes the otherworldly menace of the Mythos into the midst of the Second World War, a place already steeped in real world horrors. The setting pits civilians and career military alike, from across Europe, the British Commonwealth, and the United States, against creatures of mind-bending appearance and cosmic-level indifference to the fate of squishy humanity.

This review covers the Investigator’s Guide for the game, with all the details players need to create and run character’s in the late 30’s and 40’s. The book provides mechanic compatible with both the Call of Cthulhu, Sixth Edition and Savage Worlds roleplaying games.

Form
The Achtung! Cthulhu Investigator’s Guide comes in both electronic and physical formats, though I’m reviewing from the former. Written by a whole team of writers and freelancers, the book’s published by Modiphius Entertainment Ltd.

When you get the PDF copy, you receive both a printer friendly and a standard version, the former doing away with any pattern background to reduce pressure on your poor ink cartridges.

The 154-page supplement adopts a very readable two-column format, interspersed with pictures and period photographs. Where featuring mechanics specific to one or the other system, it shows a prominent mark – either a green Cth or a red Sav. The text features scattered quotes from real world personalities of the period, historical notes, relevant asides, and handwritten-style marginalia relating to weird in-game happenings and recruitment notes.

The pictures are all fine – most adopting a sort of broad brush painted style. Oddly, the Guide takes an almost 100% real world approach, but the pictures contain numerous appearances by creatures of the Mythos. Slightly odd and out of context, but not overtly disconcerting – just worthy of note.

Features
When I was reading Achtung! Cthulhu Investigator’s Guide, I was reminded of my first exposure to the Call of Cthulhu roleplaying game. In the original boxed set, the game included – along with the core rules – a slim volume called “A Sourcebook For the 1920’s”, which provided period background for player and Keeper reference. It was part game supplement, part player guide – offering timelines of world and Fortean events, price lists, alternate occupations, information on technology and a scattering of site information, useful as plot seeds for the Keeper. While it contained crunch, it also greatly enhanced the wealth of background information, painting a slightly deeper picture of the world at the start of the century.

I enjoyed reading that classic Sourcebook. It offered a valuable snapshot with just enough detail for a player to consume without drowning. I felt this Investigator’s Guide had a very similar feel, providing broad brush background without overkill on any given subject.

Chapter 1 details a general chronology of the lead up to war in Europe, with finer detail covered as the years roll on and war erupts. While you can obviously get hundreds of books on the subject, this 6-page summary boils it down to info-bites and key events. A few sidebars consider trivia around the period, like the genesis of the Molotov Cocktail and the source of the ‘V’ campaign in 1941.

Throughout the following sections, the information divides between four views – the British, the Germans, the Americans, and the French. By necessity some focus needs to exist to stop the Guide becoming encyclopedic in scope and size. These four provide sufficiently differing points of view for nations engaged in the war – mindful that any Second World War campaign will need to at least consider the heart of the conflict, even if adventures might roam further afield.

Chapter 2 considers the impact of the war in terms of jobs, rationing, fashion, and entertainment – including song, dance and movies. Each part of the chapter considers the elements from the viewpoint of the different Allied powers, as well as the Germans, with examples and timelines, where appropriate. So, for example, section on entertainment includes the most popular songs during the years of the war and some of the key movies of the period.

Chapter 3 presents social timelines for Britain, France, and the
Unites States of America, offering a civilian view of the period. Going through this did return me to the classic “Sourcebook” timelines, as the dozen pages cover matters of politics, employment, agriculture, bureaucracy and more.

With the civilian angle covered, Chapter 4 covers the different military,
intelligence, and auxiliary services at work in the midst of the war. This chapter links well into the crunchy sections associated with the game systems, prior to launching into those mechanics. Scattered with pictures, quotes and trivia, the chapter efficiently covers the varied, complementary and oftentimes competing forces on land, sea, in the air, or the shadows.

With the background and the mood set, Chapter 5 launches into character creation for Call of Cthulhu. While the text consistently refers to CoC 6th Edition, those who use the system know that little difference exists between editions.

As well as covering the basics of nationality and general occupational focus, ‘How Do You Know The Mythos?’ provides a means to personally attach a character’s background into the hidden horrors that lurk behind the conflict and give motivation for getting involved. It’s a nice touch that should provide an initial creative shove for players and some personal emotive hooks for Keepers.

The bulk of the rest of the chapter outlines occupations best suited to the period of play, civilian, support and military. Each states Earnings, possible Connections, areas for Specialisations, occupational Skills to spend your points on and one or more Bonuses. Those Bonuses provide a flourish in the form of small bonuses to characteristics, special skills, or immunities – like resistance to certain types of persuasion or hardening to the all too common sight of death.

Military Character Generation covers the business of creating your investigator in a little more detail, as the process necessarily varies from the more common approach covered in the core rules. Players have to guide their characters through a few hoops – like physical fitness checks and boot camps – and then test their potential against the thresholds of their aspirations. No point aiming to become a bomber pilot if you’re a hulking brute who can’t even squeeze into the plane. Like the civilian occupations, those in the military share a similar breakdown, with the addition of Entry Conditions & Prerequisites and minimum Rank.

This is a big section covering a huge range of options – but, as always with the relatively simple Cthulhu system, there’s nothing stopping you from working with the Keeper to come up with something else and working out the specific using the Guide as a template. In terms of the hoops and thresholds, best approach would be to also work with the Keeper in setting your characteristics at a viable level using an agreed methods – whether rolling and assigning scores for characteristics or going for a point-allocation option. The process isn’t prescriptive.

Chapter 6 explains and defines both new and existing skills through the lense of world conflict and military training, adding skills like Aeronautical Systems, Comptography and Tactics. Many existing skills appear with notes on changes due to period – given the advance of twenty years between the core game and the war – and focus on battlefield use like Surgery, Pilot and Hypnosis. Favourite – Institutional Lore, for those who want to add the horrors of Government bureaucracy to their gaming experience. Sanity rolls at the ready!

Chapter 7 aligns to the Savage Worlds system – and here the book not only covers the material specific to Achtung! Cthulhu, but also adds Occupation Packages well known to those who play Call. Alongside Intelligence Operatives and Resistance Agents, you have Attribute, Skill and Edge sets outlined for Antiquarians, Private Eyes and Parapsychologists.

Some skills get an expansion or realignment in definition before the book provides a range of new Hindrances and Edges.

The final chapters round out with The Tools of the Trade, which covers equipment and (most importantly) guns available to those in military occupations (or with the contacts to acquire military hardware through more shadowy channels). Lots of tables for both Call of Cthulhu and Savage Worlds, with plenty of variations. Quick Play Guide outlines character creations and key spot rules for both systems. Finally, Suggested Resources gives players and Keepers alike a range of movies, TV, books, web pages, roleplaying games and places to visit.

Back papers include character sheets for both systems and an index. The PDF also includes thorough bookmarking, including all tables.

Final Thoughts
The Achtung! Cthulhu Investigator’s Guide offers new occupations, skills, equipment, character life events and WWII background for all the Allied powers. Catering to gamers using either Call of Cthulhu or Savage Worlds for the finer details, the real world background has a more generic value to anyone looking to play in a Second World War campaign.

Effectively, while the Guide comes with the Achtung! Cthulhu tagline on the cover, little here actually binds it to the setting – that stuff lurks in the Achtung! Cthulhu: Keeper’s Guide. To be clear, that’s a good thing. To my mind, this book has a more general appeal and potential because – aside from the occult-tinged pictures – this is all about the war, the Allied powers, and the people who fought for their freedom against Nazi oppression. That means players can become familiar with the baseline setting, and then the Keeper can layer on the weird, the cosmic and the bowel-wrenching supernatural.

While a lot of other books have covered this period or the generation of military characters for the two systems, the fact this book caters to players makes for a key selling point. If you can stretch to a couple of copies, then the group can create characters, refer to new material, and refresh themselves on the real world detail whenever they like. The Keeper can deliver the shock and the horror without the players having a clue what’s coming.

My copy was provided for review. Achtung! Cthulhu Investigator’s Guide, Modiphius Entertainment, current reduced to $12.74 (from $14.99) in PDF at time of writing.