You are here: Home / Games / Tabletop & RPGs / 75% of Steve Jackson Games’ business is generated by Munchkin 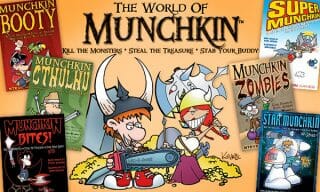 Steve Jackson Games is impressively transparent with fans. They publish a report, even though Steve Jackson is the only stockholder, to reveal how well (or not) the company is doing.

You can read the latest Report to the Stakeholders for 2013 on their website today.

The company has been going since 1980 and now has 43 full-time staff and contractors, actually by the time this report was published they added a few more and they have several part-time staff as well.

The publisher enjoyed a gross income of over $8.8 million. That’s a wonderful figure to see for any publisher of RPGs, card and tabletop games. This figure includes the $1m from the Ogre Kickstarter.

Munchkin, which is now available in 16 languages, accounted for 75% of Steve Jackson Games’ sales. As you would expect they added plenty more Munchkin material to their lineup. In 2013 the core Munchkin print run hit 130,000. Dice games account for 7.6% of total sales with Zombie Dice coming in 4th in terms of Dollars or 2nd in terms of units sold.

The company is now represented by Surge Licensing and finally got going with Castellan. The game is only 1% of total sales but it’s not a Munchkin title and so represents diversity.

It isn’t all good news. Steve Jackson is taking six months off to cope with the aftermath of flooding and the destruction of his home. However, the capable Phil Reed will run the company – something he’s effectively been doing already – until Jackson returns.

SJG is also spending money to support UltraCorps. That’s a game that didn’t make it out in 2013 and does not look likely to be published in 2014 either.

In his wrap up Steve Jackson acknowledges the continued importance of crowdfunding in the industry and the rise of conventions.

75% of Steve Jackson Games’ business is generated by Munchkin

Tabletop & RPGs I Can Haz Fate Core? A Review of The Secrets of Ca…