You are here: Home / Books / Alien Indian steampunk: A review of Jani and the Greater Game 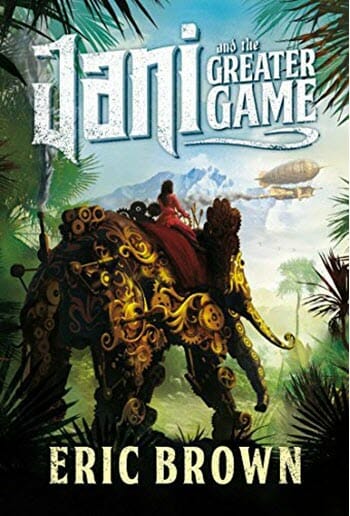 Jani and the Greater Game @ Amazon

Jani and the Greater Game is the first in a new series from sci-fi writer Eric Brown. Brown’s previous books include the likes of Satan’s Reach (Weird Space), Helix Wars, The Devil’s Nebula and plenty of other titles that often involve alien fleets.

Readers familiar with Brown’s usual sci-fi style will be forgiven for wondering what he and publisher Solaris might have been doing with a new series that features a half-English half-Indian girl called Janisha Chaterjee as she recovers from an attack on the airship she was travelling on and copes with a steampunk version of the British Raj.

I was less familiar with Eric Brown than that. It was the steampunk angle that lured me. Steampunk with a strong female protagonist? Yup. That’ll score a place on my reading list.

As it turns out – the two might not be so far apart. There’s something very strange about the figure who helps rescue Jani from the airship crash. He helps keep her safe from the Russian troops who targeted the British vessel. In exchange for his help, though, he gives Jani a strange artefact that quickly drags her into a world of espionage.

In this alternative history the presence of steampunk technology is due to the discovery of a magical element called Annapurnite. This fuel source is found only in the Himalayas and the Himalayas are entirely controlled by the British.

The Annapurnite give the British forces the technological edge over both China and Russia. Neither China nor Russia are sitting back and doing nothing about this. It is a dangerous world to be involved in the Annapurnite supply.

I enjoyed the twists in Jani and the Greater Game. I really enjoyed the world created by Eric Brown – especially the mystery around the Annapurnite and Jani’s guardian. My main grumble is an abundance of “I’ll explain my secret plan… later” situations. It was especially frustrating when characters junior to our otherwise clear minded Jani would play that card.

Steampunk in India turns out to be a brilliant idea. Steampunk elephant mechs are a fantastic visual. Throw in the tensions between the locals and the British, spice that up with both tensions between the Indian classes and different points of view from inside the British presence and there’s a boiling point of cultural clash that really suits the genre.

Brown seems able to create interesting characters at will. We had a scheming priest called Durga Das and a sidekick called Mr Knives. I immediately found myself mashing up Indiana Jones and the Temple of Doom with steampunk tropes in my mind’s eye whenever they were on the page. The fact that there was a bit of tension between these two seemed entirely appropriate and produced some of my favourite scenes.

This is the first in a new series. At least; that’s my expectation and that’s certainly what the book hints at. There’s a resolution, sure, but in doing so we get a hint at just how large the Greater Game is and how important it will be.

In short; Jani and the Greater Game is recommended to steampunk and alt-history fans, it is recommended to Eric Brown fans and I’d even suggest sci-fi fans looking to try something different give it a go. The writing is crisp, clear and engaging. I whizzed through my copy.

Alien Indian steampunk: A review of Jani and the Greater Game

Geek Stuff Schuh release exclusive superhero converse range
💰 Copper Coins 💰 Geek Native is an affiliate and may earn commission on purchases you make from third-party sites.
🍪 Privacy & Cookies 🍪 The site uses cookies to survive. By accessing the site, you agree to use your browser to control cookie use or take 1d4-3 privacy damage (tracking). If you defeat cookies via ad blocking, please consider the Patreon. An intro to cookies, and how to control them, can be found here. I Manage Cookies