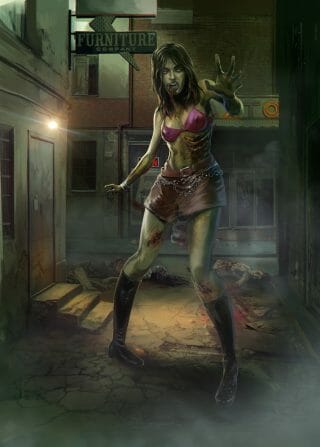 If you are asked the question; “Should zombies run?” the correct response is something along the cards of; “No, zombies should stay fully dead, immobile and in their graves”.

The question Geek Native asked in a competition to win a bundle of Dana Fredsti zombie books was slightly different. The question was whether it was thematically acceptable to have running zombies – either in fiction or in a roleplaying scenario.

The competition was open to everyone, roleplayers and those of us yet to experience the hobby, so the poll also asked respondents whether they were gamers or not.

The results are in – the quiz collected 46 answers and about one third were gamers. According to this mall survey; roleplayers are far more tolerant of the notion of running zombies than non-gamers. 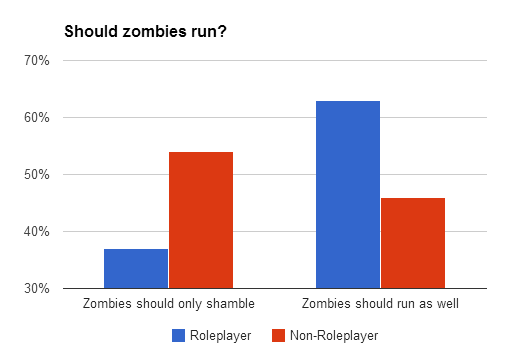 After the launch of the competition I asked the Roleplaying Games community on Google+ about their thoughts on the running zombie issue.

Paul Sheppard mulled over the “biology” of zombies and noted;

I don’t mind “fresh” zombies moving at normal speeds, but I think they should slow down as they rot and muscles decay.

However, Atomic Ninja’s Jerrod Gunning had an alternative take;

I’m a zombie purest. Romero established the cannon when he ‘created’ the monster to begin with. Slow moving, mindless, flesh-eating reanimated corpses. Done and done.

Beyond the fast or slow, my other objection is ‘skilled’ zombies that can use door knobs. In my opinion, if my dog can’t do it (except for running of course) neither can a zombie.

There was some discussion as to whether RPGs generally handled zombies correctly in the first place. Game author Adrian Thoen (The Spellslinger, The Fae) chipped in with some sensible observations.

A lot of RPGs don’t treat zombies the way I picture them. In zombie fiction, the zombies are a danger, an ever-present threat that makes the environment unstable and hostile. They aren’t an enemy to be defeated but a hazard to be avoided.

Zombies also often aren’t the point of conflict. If you look at walking dead, this illustrates it perfectly. Zombies are a hazard, but the challenge is around building a life in this hostile world, and the conflict rises between different people having different ideas of what is acceptable lengths to go to in order to survive. It’s about different factions fighting over scarcity. Scarcity of security, scarcity of food, scarcity of other resources.

Most RPGs stat up zombies as a group of individual creatures that can be fought off and overcome. If you want to get at the source fiction and emulate that, you need the zombie horde to be an environmental hazard. Whether they shamble or sprint isn’t the point, whether there’s any possibility of defeating them is.

If you have dozens or hundreds of zombies in a great herd that must be navigated or fended off until escape is possible, and individual kills don’t matter, that gets to the heart of what zombie fiction is about.

Don’t stat your zombies as individuals. Treat the horde as an ever-present hazard that must be navigated or avoided. Have the hoard closing in or a zombie attack be the cost of failure, and see what happens, and how worried your players really get.

What do you think? Should GMs and writers restrict zombies to slow moving threats that terrorise the players through weight of numbers? Or are you okay with fast moving zombies in your books and games?

Surprising? Roleplayers are more accepting of running zombies than non-gamers

Anime Psychological cyberpunk: A review of Psycho-Pass
💰 Copper Coins 💰 Geek Native is an affiliate and may earn commission on purchases you make from third-party sites.
🍪 Privacy & Cookies 🍪 The site uses cookies to survive. By accessing the site, you agree to use your browser to control cookie use or take 1d4-3 privacy damage (tracking). If you defeat cookies via ad blocking, please consider the Patreon. An intro to cookies, and how to control them, can be found here. I Manage Cookies