You are here: Home / Games / Tabletop & RPGs / We’re All Doomed: A Review of Shedding Light for WH40K 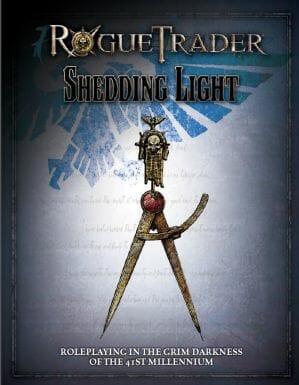 I have a soft spot for continuity and the clever business of interlinking events in one adventure with those in another. From the perspective of running a game, there is greater satisfaction to be had when the puzzle pieces fall into place and the players make little noises of consternation or satisfaction when they see the big picture. The gratification for GM and players alike can be considerable and memorable. It’ll be the sort of thing that gets talked about for many years to come.

Form
Shedding Light is a 33-page PDF adventure for Rogue Trader, including cover, written by John Dunn, and published by Fantasy Flight Games. The booklet includes plenty of atmospheric Warhammer 40,000 artwork, both colour and black/white, feature aliens, characters, and landscapes.

The rear of the booklet contains 12-pages of pre-generated 3,000 xp characters suited for immediate out-of-the-page use with the adventure outlines, or you can choose to use characters of your own.

Features
The events of Shedding Light deals with the arrival of a ship in system carrying the members of a Rogue Trader dynasty, a cargo of valuables and a treasure map. The relatively slim volume contains SIX pre-generated characters – which impressed me, as normally these sorts of adventures only include four. With six in hand, you can accommodate a larger con group or offer some possible flexibility in selection to a smaller group.

All four adventures really boil down to some brief background, a setting – with a gazetteer on Solace – and a few encounters, along with statistics for the enemy. They’re interlinked samplers or tasters of the systems, as each mission involves iconic enemy forces you would expect to see in the relevant version of the FFG WH40K system. I won’t spoil the surprise in this review – but, suffice to say, Solace is in big trouble.

The outline covers the approach to the planet, negotiating a way down to the surface, and then several surface (or near surface) encounters once the characters reach their destination. The destination encounters all effectively represent optional content – in that you have a start and end, but anything between you can tailor to the time available. Run in a four hour con slot, with introduction, explanation and distribution of characters, you will probably get enough time for one full combat, one brief skirmish with options to avoid, and a couple of role-playing confrontations. Given the wind-up and wind-down of a con game, that’ll possibly be all you can manage unless the players really hit it hard on the pacing and progress. If you choose to run all the encounters, expect the adventure to run closer to 6 – 8 hours, especially if your players enjoy both role-play sparring and face-to-face bust-ups.

As a taster for the system, the adventure does a solid job. The text contains various approaches to how the players might handle each element of the mission and details appropriate skill checks and difficulty levels. While the booklet states that you will need the core Rogue Trader book to run the mission, I believe that if you’re familiar with the system or own another one of the series, that will suffice to see you through. Rogue Traders system includes a profit mechanic unique to that iteration of FFG’s Warhammer 40K RPG series, but if you run Shedding Light as a one-off it hardly matters.

To be critical, there is nothing awe-inspiring herein. This is not clever or mind-bendingly original role-playing. Shedding Light offers you a setting, a purpose and linked encounters, with some advice on approach. Written as a convention game, it really only considers one way into the situation – though it wouldn’t be hard to create that same introduction if you wanted it for an ongoing game.

Solace sits in a pivotal spot, a planet already ravaged by the Empire, but still with a great deal to offer. Warehouses and manufactorums overflow, making the planet a place of rich trading potential, and a prime target for plundering. While the gazetteer isn’t long, it does offer enough information for a capable GM to build on and turn into a staging point for a string of adventures.

Final Thoughts
This last point is worth considering, in final review. As an adventure for an ongoing campaign, I’d suggest that Shedding Light isn’t a full and satisfying adventure straight from the page. You have a seed of potential that warrants work to extend and expand upon. The text has reference to several personalities that you can beef up and role play to the hilt; while the secrets of Solace lay hidden and only hinted at.

You have a skeleton brief here, a briefly sketched platform to work from. However, for the purpose of a con or demo game, this reminded me of the booklets that FFG created for Free RPG Day in earlier years. You have all the material here to run a quick and exciting game to introduce players to the Rogue Trader system and setting. At a con, you will fill a slot. With all four interlinked adventures, you can have something quite special to offer, something certain to leave convention goers keen to investigate further in their own time.

One other use for this sort of adventure would be for your home gaming group, if they’ve never tried the Warhammer 40K system before. This or one of the other linked missions offers a great chance to test the system out and see if you have the interest to pursue a campaign before investing in one of the big core books.

Shedding Light, John Dunn, published by Fantasy Flight, and priced $4.95 in PDF at time of writing.

We’re All Doomed: A Review of Shedding Light for WH40K

Art Dazzling portraits of some of Marvel’s fines…

Mobile A dream team? Fallout’s Obsidian sign with P…
💰 Copper Coins 💰 Geek Native is an affiliate and may earn commission on purchases you make from third-party sites.
🍪 Privacy & Cookies 🍪 The site uses cookies to survive. By accessing the site, you agree to use your browser to control cookie use or take 1d4-3 privacy damage (tracking). If you defeat cookies via ad blocking, please consider the Patreon. An intro to cookies, and how to control them, can be found here. I Manage Cookies