It seemed unlikely that Steve Rogers would be able to carry on as Captain America in the current comic book series. Rogers has lost his Super Soldier Serum and is aging. He’s in no position to throw the shield. 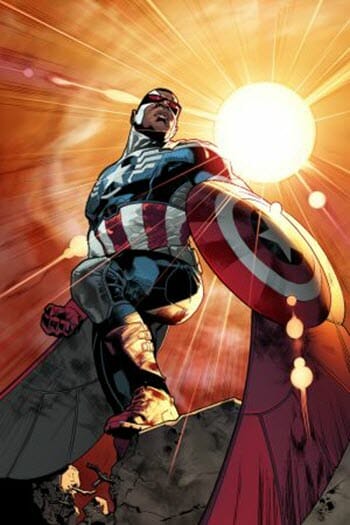 “Historically, Falcon would often act as air support, flying Steve into the battle. Why not merge the two? He pops the wings, and as he flies, he keeps the shield latched onto his back. He dives down onto the scene, hurls the shield, wings retract, and rolls into a kick or jump, catches the shield on the way back. He doesn’t have the super soldier serum, but he has the added zing-zang-zoom of flight.”

Marvel may be courting controversy with character changes – female Thor, for example – but there’s other elements here too. Is this a comment on 21st century America? The super power is known for being able to provide the best air support in military crises across the world but also being reluctant to get involved on the ground.

I wonder how much of that sentiment is reflected when Marvel wrote;

Despite the edge provided by Captain America’s newfound aptitude for altitude, he faces a daunting challenge from a deeply entrenched opposition. The terrorist organization Hydra grows in power and influence, infiltrating the Marvel Universe completely. With Steve Rogers seemingly down for the count, his enemies rally to seize upon a vulnerable America.

The Avengers are changing. Thor is a woman. Captain America is no longer a super soldier but a technology-based hero.

Do you think Marvel have the right direction?

Tabletop & RPGs WizKids announce Guardians of the Galaxy HeroClix…
💰 Copper Coins 💰 Geek Native is an affiliate and may earn commission on purchases you make from third-party sites.
🍪 Privacy & Cookies 🍪 The site uses cookies because that's the internet. By using the site, you agree to their use and 1d4-3 privacy damage (tracking). If you defeat cookies via ad blocking, please consider the Patreon. An intro to cookies, and how to control them, can be found here. I Accept