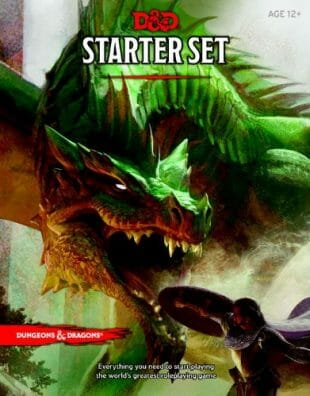 Wizards of the Coast have made the Basic Rules for D&D 5e available for free in PDF form. That’s great news for gamers but the document is bare bones, without illustration, and it could be argued such a presentation isn’t for beginners. If you’re curious about D&D, have no previous experience in the hobby but want to get started then the D&D Starter Set is for you.

The D&D Starter Set is a box. It contains two pamphlets, some sheets of paper and some dice. The pamphlets are the D&D Starter Set Rulebook (32 pages) and an adventure called the Lost Mine of Phandelver (64 pages). The sheets of paper are 5 filled in character sheets; two human fighters, one elf wizard, one halfling rogue and one dwarf cleric. Actually; it’s a lightfoot halfling and a hill dwarf – those racial flares being a signature effect of 5e but not described in the starter set. There’s also a blank character sheet on the back of an ad for D&D Encounters. The dice aren’t what you’d find in a board game; these are roleplayers dice and different than the standard 1 to 6 variety.

I’m not a great fan of pamphlets. I’ll admit it. They feel so flimsy and fragile. I’m not one of those gamers who protect his gaming books with covers and wraps but I don’t like to think of them getting damaged. For the purpose of this review, though, I’ve taken a step back and imagined myself as a curious geek, who has just paid US $19.99 or GB £17.99 on a box set. Have I got value for money? I think so. The Starter Set pamphlets feel like board game instructions I might have got for a top of the range board game. The dice are nice. I think Wizards of the Coast have probably got it right. The colour pamphlets are clearly an introduction to the game but don’t feel like the cheapo version of the game.

The D&D Starter Set Rulebook looks at the first five levels of character; that means spells up to 3rd level, prophecy bonuses up to 5th character level and so forth. The rulebook, by necessity, looks at the mechanics of a game of Dungeons & Dragons. There are four chapters;

The first chapter looks at the core six abilities characters have in the game and how to get started. Then the rules dive straight into combat. In a normal review situation I’d raise an eyebrow at this. I prefer to see games set the scene first. This doesn’t have to be about storytelling but it should be about roleplaying over rollplaying. That said; I accept there’s an argument for the Starter Set that says the kit needs to help new gamers through the complex bits. A carefully created section on combat makes sense in that regard.

I’ve held off reading the Basic rules knowing I had the Starter Set to review. I wanted to see how successful this boxset was in walking me through the mechanics. I think it does well. There’s no example combat but instead a step by step approach. We begin with the Order of Combat, consider Movement and Position, Actions in Combat and then onto Making and Attack, Cover and finally Damage and Healing.

It’s actually the third chapter – Adventuring – that has the biggest challenge. Which rules do you pick for a Starter? Wizards begin by talking about Travel. This, I think, is very clever. For me it invokes memories of Lord of the Rings and reminds me there is adventure between dungeons. There’s a marching order to think about when characters move around; who’s at the front, in the middle and at the end. Characters can walk 24 miles a day.

The same chapter then goes on to talk resting; long and short rests. Equipment includes the new, simple, carrying rules, weapons and armour. Pretty much each bit of armour has its own rules or modifiers. It’s clear and simple when you’re dealing with a bite sized collection as in the Starter Set. It’ll be interesting to see how this scales as Wizards of the Coats and others expand to the global inventory.

The magic section is straight forward. There’s a range of spells, listed in alphabetical order, along with some commentary on how spellslots work.

There is a rules index – but it’s not on the rule book. The back of the adventure Lost Mine of Phandelver has it.

There are no monsters in the 32-paged rulebook. This means DMs who want to run their own games, rather than run the pre-written adventure that comes in the box set, will have to recycle monsters from the adventure or use NPCs based off the pre-written characters.

To avoid spoilers this review isn’t going to get into the Lost Mine of Phandelver except to say it offers plenty of help to the gamer who’ll be running the game (the Dungeon Master).

The Lost Mine of Phandelver pamphlet is also the part of the box set the encourages the most roleplaying. This is an adventure that knows who the characters will be (they’ve been created in advance) and confidently makes mention of their goals and motivations.

There are far more illustrations in the adventure than in the starter rules and maps too. Flicking through the Lost Mine of Phandelver makes you want to play it. This is a good sign.

I think Wizards of the Coast face a huge but necessary risk with the D&D Starter Set. This is the first paid-for product for D&D 5e and it’ll be the weakest of the official releases. It has to be the weakest as it must be attractively priced and suitable for newcomers. Releasing the D&D Basic rules before the Starter Set helps mitigate this risk hugely because it means experienced gamers are looking at the PDF rather than at a dragon decorated cardboard box.

As it happens, I think Wizards have done a good job in the production of the Starter Set. They certainly do a great job at introducing the rules. I held of reading Basic until I read the Starter. I’m not normally keen on rule mastery but I’m now keen to read more on 5e. I think the two dice mechanic of Advantages and Disadvantages and taking either the higher or the lower looks interesting.

If you’re a regular Geek Native reader (thank you) then you probably don’t need to have a copy of the D&D Starter Set – not unless you’re a collector and want to have the complete collection. Grab the free Basic Rules for D&D 5e set instead.

If you’re not a regular Geek Native reader (hello) and are here because you’re researching the game or the hobby then the D&D Starter Set is for you. This is not a box of patronising commentary, the set is suitable for anyone 12+, and will ease you quickly and smoothly into the hobby. Just watch out for dragons.

The video tour below is a quick look at the 32-pages of rules. It uses photographs and a filter. To avoid spoilers no pages from the adventure are included.

My copy of the Dungeons & Dragons Starter Set was provided for review.

Adventure Awaits: A review of the Dungeons & Dragons Starter Set 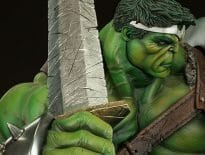 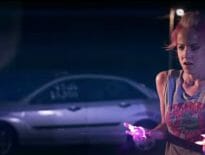