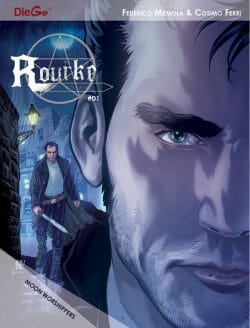 The horror-fantasy comic book series from Federico Memola have gone digital and are now available at ComiXology and at DriveThru Comics.

Set in Ireland and filled with witches, demons, supernatural horrors and plenty of magic, Rourke is an anti-hero who has the ability to take curses from others provided he takes them on instead. Rourke is troubled, stubborn and often drunk but he uses his ability to look after his daughter and earn a living.

Federico Memola, the author, is also known for the Jonathan Steele, a sci-fi fantasy, and the spin-off series Enchantment Agency. Rourke the Hexbuster is a newer series, first published in Italy between 2009 and 2010 and will now be published in English by DieGo.

Geek Native is lucky enough to have permission to reprint the interview Federico Memola gave to Kingdom of Fantasy in 2013.

The collaboration of Federico Memola with KoF began through a first virtual meeting on Facebook with our Editor in chief. Federico is an Italian cartoonist, who has worked for the magazine Fumo di China, and Italian publishers Bonelli Comics and Star Comics. The “meeting” on the social network has brought to the exciting handshake at Lucca Comics and Games, cartoonist fair which is held annually in the Tuscan city of Lucca. Just one question: why Italian comics has never been translated into English? And here we are with two works of Memola translated and published by Diego; know Frederick and happy reading to all.

Please introduce yourself to the English public: Who is Federico Memola?

I am a comic book writer Italian, for the past twenty years. I have worked with various houses Italian publishers, including Bonelli Comics and Star Comics, for which I created the heads of Jonathan Steele, Real Spells and Rourke. 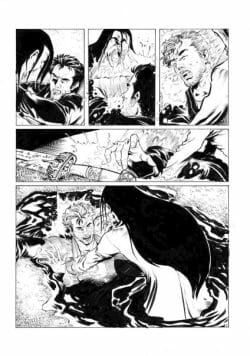 You attended the Linguistic college and the Faculty of Letters, we know from your biography that you left your studies to devote yourself entirely to work, how were you introduced to the comics world? Only a fortunate case (the meeting with Antonio Serra*)? *Another Italian comic author.

The meeting with Serra (one of the creators of Nathan Never, the most important science fiction series comics in Italy) was decisive because it offered a professional opportunity, but passion for comics goes back to my childhood. My parents were reading comics and I am grew up with Barks, Gottfredson, Foster, Raymond, Goscinny and many others … The comic strip has always been part of my life, in fact.

You are a script- and screenwriter, do you also have a “gifts” for art? Do you ever make a first draw of the artwork or you just imagine the story? Is ever happened that the artwork didn’t fully represent your “story”?

I’m totally denied to the drawing, and then I trust completely to the designer. What is a different person and plays my scripts, so the result will never be corresponds exactly to what I have in mind. Indeed, often the result is even better than what I had in mind! Then it depends on the affinity with the designer: with some of the report is also of friendship, as well as professional, so there is a greater dialogue that benefits the final result.

A draw, an imagine is story itself, narrative and symbolism have an immediate understanding regardless of the country, consequently may a writer find it more difficult to be “understood” abroad? Rather than an illustrator?

Yes, definitely. The drawing is a “universal” language which is not necessary for understanding the share the same language. A designer can show their tables or illustrations in a person from any country to receive an immediate opinion. On the contrary, also the simple text requires a translation before they can be read by someone who does not speaks your language. This simple and obvious truth becomes a further obstacle in the path of a writer who wants to present itself at foreign publishers. But, paradoxically, it is even the lesser obstacle. The main obstacle that a writer encounters when seeking to present their work in a foreign market (or, even worse, when it is proposed professionally) is the belief, on the part of the editors, that “only their authors like to know what their audience. ” This was confirmed to me by many designers working for French and American publishers: a designer can also come on the other end of the world, but the story is preferable to be written by a writer who knows the tastes of the local reader, which then has its own culture and “sensitivity”, creating a greater harmony. I think that it is within this context, the comment that I received a few years ago by a Spanish editor, after reading the first issue of a comic book that I had written for his publishing house, told me candidly “after reading a little ‘comic Bonelli I was expecting a story very wordy and boring, but it’s nice. ” Overcome this bias is very difficult, because-and here we return to the problem of language barrier-it is true that the familiarity that a writer has with their own language, nuances, word games, the speech of the characters … Much of this can be lost in translation, of trivializing the text. As just one example, in Agency Myriam spells and Jasmine are also characterized differently in the language use, so that in a scene can be identified even without being in the field, just reading their dialogue. It ‘a matter of choice of words and expressions features that I have no idea how they will be rendered in the English translation! 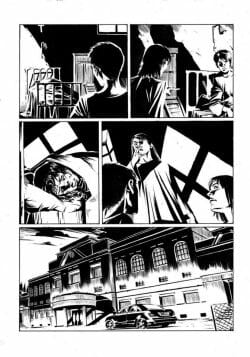 A comic created for a young Italian audience can adapt itself for the foreign market? Anglo-American in the case of DieGo? Which advice will you give to DieGo’s readers for a better understanding of your work? Specifically The Enchantment Agency and Rourke.

I have no idea, to tell the truth: all fiction, comics and movies that I have “absorbed” during childhood (and even today) comes from all over the world and has influenced the way I write. not I think that my stories can be classified in the classic Italian tradition and not I think therefore that require special tips for their use. To say, a couple of years ago a Spanish editor commented on a story I had written to her publisher saying that an author Bonelli expected a slow and tedious history and was rather surprised by the fast pace.

The Enchantment Agency, which was born as a spin-off of JS, is a sort of contemporary fantasy, and indeed the presence of elves, goblins, etc. refers to the fantasy genre, but give us your personal interpretation and definition of “contemporary”, what makes this series contemporary? Perhaps the implementation of quotas for women :)? The series main characters are women and lets not forget the irony and the tip of eroticism … contemporary women then?

Quite simply, it is a fantasy series because, as is the tradition, there are magic wizards, elves, goblins and various fantastic creatures. Contemporary why all these elements are placed in a modern context. As if the world of the Lord of the Rings had evolved technology to become our own, but without losing what he had magic. In this context, they move the two protagonists, two normal (apparently) girls of today, emancipated and dynamics, but also possess magical powers.

Let’s now talk about Rourke: Irish setting with Dublin and the typical rural landscapes of the island, there is a character once again surrounded by the magic with the incredible gift of drawing upon himself the curses that plague third persons … a character like Dylan Dog? The presence of witches, spells, curses is typical in your comics, what does draw you in the creation of the characters and the structure of the stories? What are your favorite readings? Fantasy, gothic,folklore? Why did you choose Ireland as setting?

Rourke and Dylan Dog have in common is that they both belong to the horror genre, but for the rest could not be more different: Rourke is a mini series with a narrative structure become, with characters and situations that change dramatically from start to finish, while Dylan Dog is a character crystallized in the series. Even as characters have little to that share: Dylan is younger, womanizer, more comfortable with the monsters that the so-called “Normal people”, while Rourke is single father of a teenage daughter (with all the problems it would have) and would rather avoid the “gift” that allows him to make his work, because of which often seeks solace in alcohol. Ireland was chosen as the setting for his strong Catholic tradition, which is a very relevant within the series. From this point of view also Italy was able to run, as a backdrop, but the Irish people is much more related to ancient folklore, which made Ireland a choice in line with the contents of the miniseries. 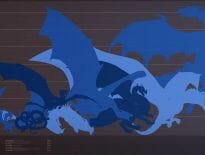 Geek Stuff 15 dragons and you – a size comparison 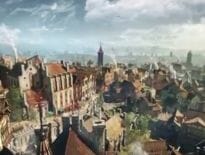