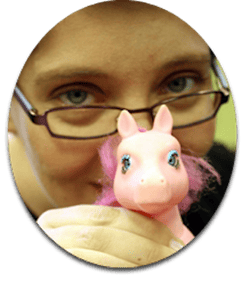 Elizabeth Strong is part of the Basic Adventuring 101 LARP webseries. In fact, Elizabeth is the writer and script supervisor for the show with the well written and worth a look pilot episode.

Geek Native offered the 101 cast and crew a chance to share some game geek goodness and it was Elizabeth who stepped up to the challenge with five good tips for your non-player characters.

Whether you’re running a table-top or running a live-action role-playing game, great non-player characters, or NPCs, add texture and depth to an otherwise mundane campaign. Great NPC interactions can be the basis of player stories for years to come.

1. Give every NPC a name

NPCs show that the characters exist in a dynamic world. And in a dynamic world, everybody has a name. More importantly, they have a name they can remember and introduce themselves by without stumbling over it. Players will discount any NPC that stumbles over their name or pauses to say ‘just a sec… my name is Earl!” NPCs with names that are introduced with confidence are perceived to be more important to the plot. Even if it’s just a random merchant you send in out to sell the players some needed goods, the players will make note of that, and even possibly ask for the same merchant for name later.

For whatever reason, sometimes players just don’t want to interact with a particular NPC. Maybe they’re busy. Maybe they are cranky because they haven’t had lunch. Who can say? But whatever the cause, sometimes players just don’t bite when you throw them a plot hook. The best way to handle this situation is to just drop the NPC. If you force the issue, it breaks the player’s immersion, and really makes them feel railroaded. The world feels more dynamic if the players don’t have to respond to every request for help. It can also add an extra level of inspiration for the players to be better heroes when the bards start singing about the brave heroes (not the players) who rescued the girl kidnapped by bandits.

3. Mix and match the power levels of your NPCs

Not every NPC needs to be a level 30 sorcerer who dual-speced as a blade dancer and also has explosive trap-making skills. While the urge to make fun and powerful characters can be hard to resist, it is hardly realistic that there is an entire world populated with super-badasses. Even in a world filled with super-heroes, there need to be people rescued. Cape salesmen. Waitresses. On the flip side, if the players are the most powerful people in the world, there’s no challenge. And with no challenge, there’s no fun.

4. Nothing exists in a vacuum

And that includes NPCs. Give every NPC at least one relationship. Perhaps Giselle the dancer has a bitter rivalry with the renowned actress Moria. Maybe the brave guardsmen Auk is afraid to admit his love for Jem the flower seller. These relations serve can serve as plot hooks for side missions, but also reminds the player that the world exists independently of them and their actions.

While there are certainly some NPCs who would benefit from knowing a lot of backstory (major villains, important nobles that directly influence the players, recurring NPCs), don’t even bother with most NPCs. Backstory is a lot of work that the players will never see or care about. Instead, when whipping up townsfolk and merchants and the like, I go through four bullet points. Name, goal(s), biggest fear, and one defining character trait. Goals are a character’s driving motivation. Ariel, the peasant woman, is seen outside the tavern, trying to get the attention of any passersby. Her goal is to find someone to rescue her daughter, who has been kidnapped by a group of bandits. Her biggest fear is giant spiders. This may never come up, but gives the person playing the NPC something to play up or mention in passing, adding a bit of depth. A great example of this is Indiana Jones and his hatred of snakes. Even a small line such as “why did it have to be snakes,” gives the illusion of a well-rounded character. Finally, one defining character trait. Perhaps Ariel is a knitter, and any time she has a moment or is resting, she whips out her knitting. Maybe she has a hair-trigger temper when it comes to her daughter, and she gets in fights easily because of that. The NPC can develop organically from this starting point, without having to spend hours working on back story. 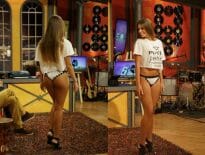 Geek Stuff Give your bum the 8-bit treatment 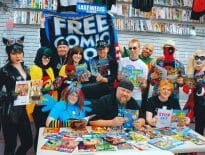