Death Knight Love Story is a classic “Love In The Time Of War” story. Girl meets boy, girl bonds with boy over shared love of honor, violence and swordplay, girl loses boy, girl ends up on the opposite side of battle from boy. What will happen then?

Of course, all this has the minor twist that before (almost) any of that can happen, both girl and boy are killed and resurrected by foul magic to serve Arthas, the Lord of Cold and Darkness…

How did you manage to land famous actors like Brian Blessed, Joanna Lumley, Jack Davenport and Anna Chancellor?

Believe it or not, we just asked!

Actually, it’s slightly more complicated than that, but not much more so. When I was starting to work on the project, I decided to see what would happen if I attempted to get a famous casting director involved. So I phoned up Gail Stevens, who did the casting for Narnia and Slumdog Millionaire amongst other things, and pitched her my crazy motion-capture-in-a-computer-game-world idea.

I was expecting to get a polite but firm “hell no”, but actually, she was fascinated by the project, and agreed to come on board to help us with casting.

And that was the story the whole way through. As geeks, we tend to forget just how futuristic and cool a lot of the things we’re involved with or follow are. Motion Capture, Machinima, and so on are just facts of life if you’re really embedded with computer game culture – but for people who come from a less techie place, they sound crazily futuristic and very interesting! 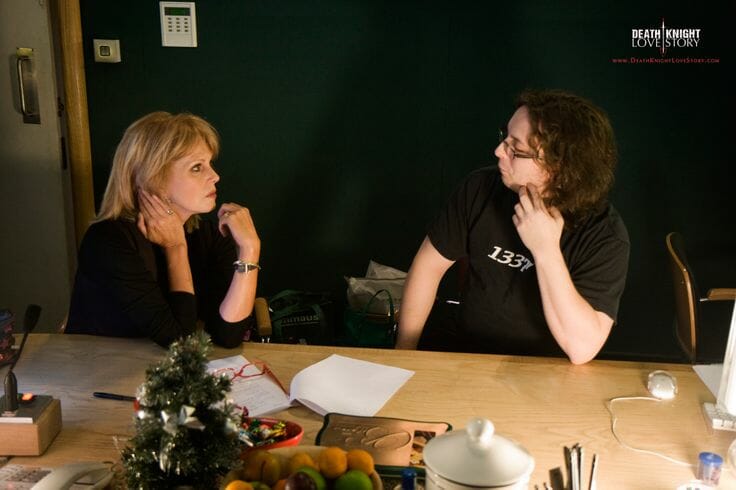 You’ve described this project as “motion capture meets machinima meets CGI” but what exactly does that mean? There’s no motion capture mod for World of Warcraft.

The most common way that people make WoW Machinima is using a tool called “WoW Model Viewer”, which allows you to load models from the game outside the game, then capture video of them performing animations. Machinima creators then edit that together with background shots – sometimes of the game, sometimes not – to make their movies.

For Death Knight Love Story, we took that approach a stage further. We took models out of World of Warcraft and into the Model Viewer – but we then exported them from there into a program called MotionBuilder, which is best known as the mocap studio program used on Avatar.

In there, we added animation which we had motion captured in our own studio, then exported the animated models into another program called Mach Studio Pro, which is essentially a game engine designed specifically for movie-making.

We re-assembled WoW sets in there too, lit the entire thing, and rendered it out to video!

As a result, Death Knight Love Story has a very unique look. I’m pretty sure that we’re the only people who have ever made a WoW movie in that way.

Does Death Knight Love Story represent the future of machimima productions or just one possible future?

Just one possible future, I think.

I don’t see everyone who makes Machinima investing in the kind of motion capture technology we use tomorrow, or even in a few years’ time. I think we’re going to see a lot more motion capture being mixed into Machinima as mocap gradually becomes more accessible – I’m looking forward to seeing what the Kinect 2 enables people to create, for example – but I think that the approach to Machinima creation that uses pre-existing animations is going to stay around for a very long time too.

I also don’t think we’ll see everyone jumping to export their characters and sets out of their chosen game, either. We had to do it for DKLS because of just how ambitious our project was, but for a lot of people, sticking inside the game will definitely be the way to go.

And there’s even newer technology than motion capture coming up, too. I’m not sure mocap is the end of the road as far as getting performances out of computer game characters. There’s some really cool research being done into teaching computer game characters to move by themselves, and I can see that starting to have applications for animation pretty darn soon.

You’re the founder of Machinima.com. What’s your involvement with the site now and how do you think the network is progressing?

I don’t have any involvement with Machinima Inc or Machinima.com these days, and haven’t for a few years. It’s fascinating and awesome to watch how they’ve grown the site – far beyond what I’d ever imagined would be possible.

At the moment they seem to be having some PR problems, but I’m not close enough to the gaming / YouTube world to know how much of that is serious and how much of it is the general round of press looking for a story.

Do you think Machinima should be doing more to support creators?

That’s an interesting question! When I founded Machinima, one of my big goals was to support and showcase creators, so it’s a topic close to my heart.

Unfortunately, it’s also almost impossible for me to accurately answer, because I don’t know what they’re doing right now! I’m neither on the inside of their promotional side nor am I close enough to their community to tell just how much individual creator-pushing they’re doing.

What I can do is talk about this from the perspective of a creator, though. From that perspective, given that the whole “Youtube network” thing appears to be here to stay, I’d say individual creators should definitely be looking very closely at what any channel they’re planning to sign up with will do to promote them. I see a lot of talk about the CPM that this network or that network will provide, but not a lot of people discussing how their network will help them grow their brand and their audience.

And support with PR and growth is far more important than CPM for month X for anyone who wants to make a living as a creator of video, long-term.

I think the Machinima guys are in a great position to do some seriously disruptive stuff within the television industry. They’re already doing a lot of that, and I’d say more of it is the way forward – particularly bringing established TV and disruptive new tech or creators together.

The cracks in the old-school media models are getting wider by the year, and companies like Machinima are in a prime position to exploit those cracks, moving faster and more nimbly than the old-media giants possibly can. Try new ideas. Break stuff. That sort of thing.

One, YouTube offers me terrible control over my video. I can’t upload a replacement vid if there’s a problem with the source file. I can’t display my video in Cinemascope (super-wide) resolution without ugly-ass bars at the top and bottom. I can’t link people to my website at the end of the video. Generally, it’s a nice platform for people who just want to quickly put something out there, but as a platform for high-quality film distribution, it sucks.

Secondly, I’m scared of their attitude to customer service. As a Vimeo Pro customer, I know that if something goes wrong with the film – which in the middle of a launch is kind of a high-profile problem for me – I can get an actual live person on the line within an hour to fix things and help me. Vimeo aren’t running any terrifying auto-takedown bots either – and I REALLY don’t want to risk a random YouTube bot driveby taking my film offline for weeks.

Maybe YouTube’s advantages in terms of being the video site everyone knows make up for those risks and problems – but I’m not a gambling kind of guy, and given I’ve spent years on this film I want to make sure that it’s displayed as I want it displayed, not in the way that’s most convenient for Google.

Do you think the Xbox One and PlayStation 4 will herald a rise of more computer game engine driven animation?

I think there are going to be a lot of interesting advances in the graphics side of gaming over the next few years. In particular, I think the rise of Physically-Based Rendering, where the game developers don’t have to create texture maps but can just define the properties of a real-life substance and use that, is going to be very interesting. That’s a technology that’s already used a lot over on the movie side of things, and I can certainly see movie-making and game development getting ever closer.

What’s really interesting, though, is the number of technologies waiting right around the corner. High-quality voxels a la Everquest Next, realtime path tracing as in the Brigade game engine, computational generation of animations without human involvement – this stuff has the potential to totally change the way games operate on a pretty fundamental level.

And then, of course, you’ve got VR. I’ve got an Oculus Rift in the studio, and I can tell you – the hype is not hype. It really is a game-changer on the level of the first networked games or the first true 3D engine. VR alone is going to mean that gaming in ten years time looks NOTHING like gaming today.

What can you tell us about part two?

Part 2 is going to be awesome. We’ve got undead dragons performing HALO drops, we’ve got the Lich King and Miria facing off, and of course we return to the battle in Naxxramas to find out whether true love can actually conquer all. And I promise you – the cliche ending you might be expecting is NOT what’s coming down the pipe.

You can check out more pictures and behind the scenes lore over at DeathKnightLoveStory.com. 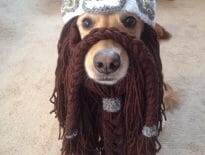 Geek Stuff Be surprised: Labradors can dress as dwarves 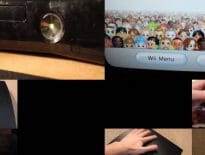