You are here: Home / Books / Comics / Art Noise: A review of One Model Nation 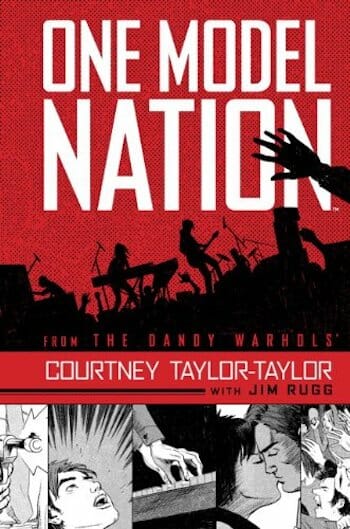 One Model Nation has sat in my to-review pile for a while; too long, according to my notes. To be honest the promise of historical events blended in with fiction wrapped together with an art noise band as the focus of the story had a fight to win my attention.

A friend who recommended One Model Nation to me, finally persuading me to pick the graphic novel up also has a passion – not for music, but for talking about Russian and German tanks. That’s the hook to the book; the year is 1977 and Germany is awash with discontent.

The four young band mates of the arty angry One Model Nation find themselves as the avatars of frustration. In fact, they become so central to the troubles that the police begin to wonder whether they’re involved with the infamous Baader-Meinhof Gang.

The Baader-Meinhof Gang, which later became known as the Red Army Faction, are the historical aspect of the book. This is a left-wing militant group that caused trouble in Germany, describing themselves as an urban guerrilla group that fought the German authorities who they described as fascist.

As it turns out there’s a lot to like here. Jimm Rugg’s art, in particular, is a stand out for me. I enjoyed the energy that came through from Taylor-Taylor’s writing. The catch? There’s too much of it. In the notes he describes originally pitching the stories to filmmakers. In order words this story must have been written with far more dialog.

Where One Model Nation lets itself down a little and starts to fight back against the reader is with the dialogue and word flow. Less would have been more. I imagine it’s terribly hard to carve out parts of your masterpiece, especially if you’ve slaved over it for years but that’s what is needed.

In fact, it seems like a third party editor would have had fairly easy pickings. There are plot strands that don’t seem to add much and don’t seem to finish. Surely those could have been whipped out and sacrificed for the greater good?

Even the historical mashup doesn’t seem to help. The members of One Model Nation do get to meet real people – names like Thorwald Proll and David Bowie. However, as you don’t care all that much about the band at that point, and the characters haven’t yet developed any personality that might catch your interest, the meeting with these historical figures falls a little flat.

I’m not sorry I finally picked up One Model Nation and read it. I can see why German history loving friends – especially those interested in military angles and facts – liked the graphic novel. That said; it’s not really one for me. It became a bit of a battle to flick through the pages and it was certainly too much of a struggle to fight through the dialogue and text bubbles.

My copy of One Model Nation was provided for review. Courtney Taylor-Taylor & Jim Rugg, Titan Books, £16.99.

Art Noise: A review of One Model Nation

Geek Stuff Cake: Death as the Hogfather
💰 Copper Coins 💰 Geek Native is an affiliate and may earn commission on purchases you make from third-party sites.
🍪 Privacy & Cookies 🍪 The site uses cookies to survive. By accessing the site, you agree to use your browser to control cookie use or take 1d4-3 privacy damage (tracking). If you defeat cookies via ad blocking, please consider the Patreon. An intro to cookies, and how to control them, can be found here. I Manage Cookies