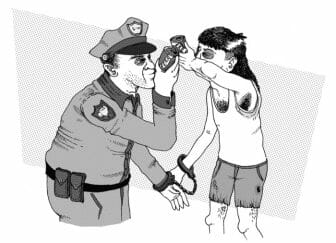 Do you have to use dice in your roleplaying game? Game designer Stuart Keating’s latest game “Three Days Until Retirement” has raised thousands on Kickstarter, many times more than target, plenty of time still to pledge (when this post goes live) and is one that uses a card-based resolution system.

OK maybe not. But the standard deck of playing cards offers a bevy of benefits to tabletop games and if you’re developing a game, you should consider ditching the dice.

We’ll discuss two indie RPGs that use exclusively playing cards and no dice, to my knowledge the only two to do so in the past decade (at least). The first is Stab City! by Ian Johnson. It’s a big-budget action movie of a game in which players serve as gonzo assassins with superhuman powers. Ian’s kickstarter funded on October 6th and he’s hard at work putting the final touches on the manuscript.

The second is Three Days Until Retirement by Dioxin Dump Games, which is really just me. So like, conflict of interest or whatever. It’s a game in which players act as grizzled “loose cannon” cops trying to solve one last crime in the three days before they retire. There’s a fair amount of explosions and death.

In both cases, the players receive a number of playing cards that represent their available actions, and the person running the game (the Pit Boss in Stab City! and the Game Runner in Three Days) gets to set challenge difficulty for various tasks. There’s a tension between actions taken out of combat (investigating clues, jumping out of exploding helicopters, jumping a riding lawnmower over a trash barge) and actions taken in combat.

In Stab City! players can use cards to improve the results of Tests, or they can save them and use them in combat to activate special powers and generally be badasses. In Three Days, players must play a “guessing game” of sorts out of combat, where the Game Runner has a set of cards representing a clue (or a challenge) and the player has to play higher than or equal to a certain card in order to succeed and then has to discard whatever card they played, while combat plays out much like the cardgame War–if you lose all of your high cards you’re going to get gunned down by a perp and that’s no fun, is it?

Taking a broad view, here’s some advantages playing cards have over dice:

Permanence: Games can be structured such that whatever card you play, it stays in effect. This happens a lot in Stab City!, where conditions (special things that occur during epic combats known as “showdowns”) can stack on players. The played cards are literally attached to the token representing the player. Pretty neat, eh?

Strategy: No longer are players at the whim of the die. They might get screwed by the cards, but they get to decide where. In a recent Three Days playtest a player had a couple of low cards in his hand and knew that if he couldn’t get rid of them he’d suffer in some impending combat. So when he triggered a trap and was informed that he had to beat an 8 or suffer consequences he played a 5 and soaked up some burns and bruises (which is a lot better than soaking up bullets, right?)

Familiarity: Unless you’re a total weirdo with a total weirdo family you’ve held playing cards. You understand on some level the rough probabilities of card pulls, and the concept of “high beats low” is extremely self evident. In Stab City! you hold five cards, just like in five card draw poker. In Three Days you hold 13 cards, just like in Spades or Hearts or Gin Rummy. Instead of telling a new player to “roll a d20. No, that’s a d8! No, that’s a d12. The other one. Siiiiigh Todd help him out.” you get to say “here’s what you have to beat. Play a card higher and you succeed. Play lower and you fail (or you succeed with consequences)” Ta da! You’re suddenly a friendly person running an accessible game.

Better randomization: The enduring appeal of poker is that the odds change with every card revealed. You can design game rules that incorporate breathtakingly deep and diverse strategies.

When you say “unique gameplay mechanic” you aren’t lying: Dice are fun. I own many dice. I like to roll them and kill of player characters in my DCC RPG campaign. But any dice thing that hasn’t been done is to complicated to do–it feels old hat and it is. Playing cards, on the other hand, haven’t been used that much in roleplaying games, and there’s a wide open field for developing game mechanics that aren’t copyrighted, aren’t boring and aren’t derivative. Cool beans!

Adds to the environment: Three Days and Stab City are both modern games with gonzo/gritty styles. Playing cards make sense more than dice, and it adds to the feel of the game. I’m going to develop a Wild West variant of Three Days, and it’ll fit even better. Gameplay should enhance the story in addition to determining it, and playing cards can do so, either through association (wild west and poker, for example) or through custom graphics/aesthetics. Make a groovy tarot deck for your fantasy heartbreaker! Each suit can represent a different race of demihumans! The sky’s the limit or whatever!

Interviews The argument for Chronos: The Universal LARP Syste…

Tabletop & RPGs A bloodbath of change among the best selling horro…
💰 Copper Coins 💰 Geek Native is an affiliate and may earn commission on purchases you make from third-party sites.
🍪 Privacy & Cookies 🍪 The site uses cookies to survive. By accessing the site, you agree to use your browser to control cookie use or take 1d4-3 privacy damage (tracking). If you defeat cookies via ad blocking, please consider the Patreon. An intro to cookies, and how to control them, can be found here. I Manage Cookies