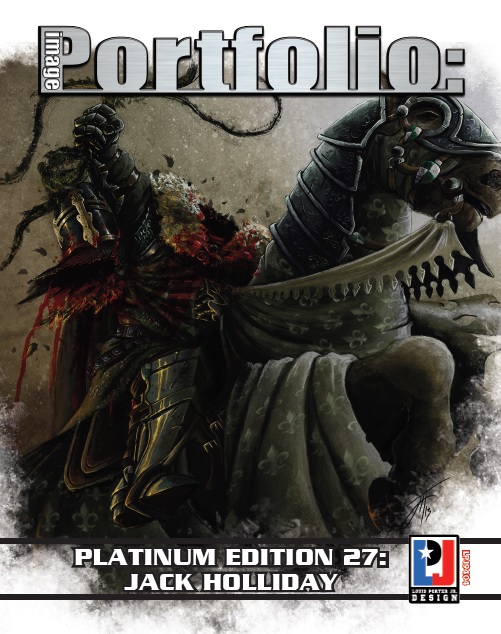 I have been a longtime fan of Louis Port Jr. Designs’ Image Portfolio series. I can remember the first time I discovered the wonders of royalty free stock art back in 2008 and have been hooked ever since. The series has certainly come a long way. Early editions were (mostly) black and white collections that often featured artwork by two or three artists. Now we have LPJ Designs’ Platinum Edition. This series consists of full color artwork by a single artist. Like the earlier collections the Platinum Series continues to provide high quality artwork for a reasonable price. Platinum Edition 27 is one of the latest in this series and features seven pieces by Jack Holliday.

The first image in the collection is of a lone figure in a red cloak walking through a wintery forest. It is hard to say exactly what the figure is supposed to be because we see him from the rear and from an elevated angle. I assume he (or she) is a wizard because of the pointy hat and staff, though I suppose you could make him any class you want. The scene is far from serene though. The snow is dark and the limited lighting suggests our figure is traveling on a cold, clear, night with his only light being from a moon. Ghostly chains hang from the trees, so perhaps he is heading into a trap or traveling someplace on the brave (or foolish) would dare go!

The second image invokes similar feelings to the first. We have a robed figure with a staff silhouetted in a misty forest. The picture is done entirely in black and grey, giving the piece a foreboding, sinister feel. The figure could easily be some sort of ghost or undead guardian ready to extract a toll from those who dare pass through his forest.

Next we have a horse chase with two men in Middle Eastern clothing and armor. The tan background suggests a race through the desert. The lead figure has two spears slung across his back. He glances over his shoulder to see a man with a shield holding a scimitar over his head.

The fourth image is perhaps the weakest of the pack (though that does not mean it is a bad piece). A figure with a pale blue banner rides a white feathery beast towards what appears to be the ruins of a bridge. My main issue with this piece is it is hard for me to figure how I could use this in a publication. You can’t really tell what the figure is riding since we see them from the back. It could have the head of Lady Gaga for all we know, though for some reason the creature reminds me of Falkor the luck dragon from The Neverending Story.

Image #5 is another dark and sinister piece. A figure in the foreground looks like he could either be holding or skewered on a long spear. Even zoomed up to 300% it is not clear whether the artist intended the figure to be living or dead. It could just as easily be a guard as a warning for those who traveled this road. Either way makes sense because behind him is a swamp and the ruins of a castle.

The next image is what the Headless Horseman’s medieval cousin must look like. A man in plate mail sits upon an armored horse. Next to him is his helmet with blood dripping from it. However, it is not clear if the knight is holding his head or if it was just torn off by some unseen beast. The knight is clasping what appear to be vines in his hands, though it might be a decoration on the helmet. I love the detail in this image-it is simply incredible. Zooming in shows a lot of effort put into the chain mail and clothing. There were no shortcuts taken on this piece!
The final picture in this collection is of a forest in autumn. I always love fall pictures, and this image makes nice use of color. The only problem with this picture is there are some black markings on the left side. I don’t know if this is a flaw from scanning or if it is supposed to be something. It doesn’t detract too badly from the image, but it does seem out of place.

Now on to the product itself. You get a PDF with said images rather than a collection of TIFFs or JPGs. This format doesn’t bother me too much, though the images don’t always copy and paste to a program like Photoshop or Paint very well. Some areas that are white end up being black when this happens. I find it easier to just take a screen shot and paste it into Paint. The only gripe I have about this collection is all images except for #2 have a white torn border effect around them. I don’t know if the decision to do this was made by the artist or LPJD, but it is a bad move in my opinion. The reason this bothers me is because it makes it limits how the picture can look in a project. If I wanted to add a border around an image I would prefer to do it myself. Despite this, I still recommend the collection to anyone looking for good fantasy art at a reasonable price. 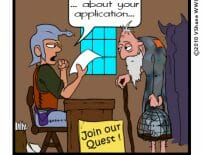 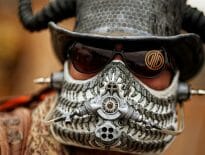 Geek Stuff The 12 Masks of Halloween: #12 Steampunk Respirato…
wpDiscuzComment Author Info
Manage Cookie Consent
This site uses cookies 🍪, and links are ads that may earn bloggers some money 💰, and with this alert, I very much hope that these dark truths 🧌 are acknowledged.
Manage options Manage services Manage vendors Read more about these purposes
Preferences
{title} {title} {title}
Loading Comments...