This GameWyrd interview first appeared in the RPGNow’s Downloader Monthly This month the free ezine looks at the Nuts and Bolts of the Fudge system, a preview of Usual Suspects for Mean Streets, a closer look at Bluffside and plenty of reviews.

1) “The best games you’ve never heard of.” I think I’ve mentioned it before but I think that’s a great slogan. Are you frustrated that more gamers haven’t heard of BTRC and your games?

Not really, as it would mostly be my own fault. I decided long ago that BTRCwould always run in the black. This means a lot of expensive stuff simplydoesn’t happen (I’m not going to mortgage the house to do a huge print runof a game accompanied by a massive advertising blitz). Second, advertisinghas to get added to the cost of the product -somehow- (unless it is freepromotion like an interview(insert smiley icon)), and I just plain dislikethe concept that I should pay more for product X simply because I’ve beeninformed it exists.

I -will- do banner ads for new products just to let people know “it exists” (sigh), but the banner ads are targeted and fairly cheap, so the add-on to the product is very small.

2) Just how good do you consider your games to be? Which is your favourite game out of your own games?

I am more of a systems geek than a gameworld geek. I think I do some of the best mechanics out there, and I think I have some cool gameworlds to go with them, but I really like to design for the GM who -demands- good rules and-wants- good gameworlds. Favorite game? I would normally say “the latest one”, which in this case is EABA. I’m still not -perfectly- happy with-every- aspect of it, but I spent about two years designing it, with the idea of “it will be ready when it’s ready”. No deadlines, no conventions that it had to be ready for. Just keep designing and tweaking until I liked the result enough to make it available to everyone else.

3) If we widen the net to include all roleplaying games past and present which would be your favourite?

Excluding my own, I presume? Probably Hero System, followed by GURPS and Traveller. I must admit to a fondness for Paranoia, and I played quite a bit of Shadowrun, but for games where I cared about the rules -and- the setting, probably the first three. They were the best at what they did.

4) How important is the PDF RPG industry to a publisher such as the Blacksburg Tactical Research Center?

Vital, since -all- of BTRC’s product is either pdf or print on demand. I went completely on-line several years ago. Sales and income are certainly below what they were when BTRC was doing conventional print runs, but the ease of getting things out the door, ease of doing revisions, no need to warehouse anything, etc. is a wonderful boon. And of course the use of 100% recycled electrons is good for the environment (tongue-firmly-in-cheek).

5) I’ve friends who play Macho Women With Guns religiously (I’m told their pink tank is a must have fashion accessory) but I’ve never seen it yet (the book, not the tank). When Amazon get their act together I’ll have my own copy, it may even be in the post as I type, but when it arrives it’ll be the d20 version of the game. Now, the Mongoose crew are a fine bunch, but how do you feel about gamers around the world seeing the book as a d20 product, especially given its rich BTRC history.

I feel that Macho Women with Guns is the -perfect- use for the d20 system. Interpret that as you will…

6) If you could take any BTRC book and make it a worldwide smash hit – movie deal and all – which one would it be?

7) If you could take any movie and turn it into a BTRC RPG – which movie would you pick?

The one with the largest profit potential, of course! If the question was instead “what movie was so cool that you drool at the thought of getting alicense for it?”, then I would probably say “I’m not sure”. A lot of really great movies work as a single episode, or for a particular small set of characters, but would be lousy as an rpg. Conversely, a lot of really great background ideas are in crappy movies, or great backgrounds are so good that everyone and their cousin has -already- done the RPG. I think Minority Report was a great movie, but I can’t see it as an RPG. And Blade Runner is one of my all-time favorites, but right now it would be just another cyberpunk title.

8) If I refused to play any RPG other than a fantasy game with orcs, dragons and mining dwarves what would you say to me?

Work those elements into your d20 Macho Women with Guns campaign.

9) If I refused to find $9 to buy an interesting looking RPG simply because it was a PDF what would you say to me?

Your time will come. Some day only anachronistic starship captains will read actual books… Practically speaking, I can see why some people prefer conventional gamebooks, which is why BTRC is trying to make new titles available as print-on-demand as well as pdf. But, as long as we can make (cost of a pdf plus cost of printing it yourself) less than the cost of a regular book, why complain? You have the ability to print off all the tables and charts perfectly instead of as misaligned photocopies. When your printed pdf gets a spill on a page or otherwise messed up, you print off a replacement. When version 1.1 comes out to fix any typos that were in version 1.0, at least from BTRC you can get a -free- upgrade to the latest version. Did company “WW” ever offer free replacements for typo-ridden 1st printings? Did you buy “SR 1st edition” only to find that rules changes meant you had to later go out and buy “SR 2nd edition”? That’s the advantage that pdf users are happy to have. As a personal note, my archived collection of “print” RPG’s -fills- a five-drawer lateral file cabinet. And I have two more shelves completely full of RPG’s in my office -just for reference-. If they were pdfs, I could probably fit the whole mess of them on -one- DVD, which would be a lot more convenient to pack when I finally move to Mars.

10) What do you think makes a game memorable? What does it take to write a RPG that wends its way slowly but surely towards cult status?

There’s a difference between “memorable” and “cult status”. I think that making a clean break from the beaten path is a good start. Being the best or only product in a niche market is another way to go about it. Paranoia or Hol would be the former. Campaign Cartographer would be an example of the latter. Call of Cthulhu would be somewhere in between, I think.

11) How long does it take you to write an RPG? How long to formulate a clear idea and concept and then how easily does that become a well written product?

Anywhere from two weeks to two years to design a game (role-playing orotherwise). Non-rpgs would tend to be at the shorter end. Macho Women really only took about two weeks to design, start to finish, while EABA took about two years of my spare time. On the bright side, the no-deadline timeframe for EABA gave me the leisure to anticipate and include the rule-wise nuts and bolts for virtually any gameworld, so I find that doing EABA supplements is taking me less time than normal. In terms of time spent on a design, I have the advantage now of being a “veteran game designer”. This really just means I’ve made enough mistakes that I no longer waste time on the obvious ones and can go straight to the subtle, deviously difficult to untangle kind.

12) Are there any aspects of the gaming industry or even just gaming in general that you find particularly annoying?

I find it annoying that we as gamers are more into the “quick fix” now than we used to be. The anonymous back-alley encounter of the Magic or MageKnight type, where cards and figures are furtively and passionately exchanged, and you wake up the next morning to find you never even got the other person’s name. What ever happened to “meaningful relationships”?

13) Are there any aspects of the gaming industry or gaming in general that you find especially welcoming or encouraging at the minute?

The increasing acceptance of pdfs. Overall (not just at this minute), the general friendliness and helpfulness of everyone in the industry. Even if certain segments are glutted and there is a limited supply of customer dollars to go around, most people within the industry are still genuinely nice to each other.

14) What can we expect from BTRC in the future?

Soon, something grotesquely evil, with no socially redeeming features and a “immature audiences only” label that will still make you bust a gut (the title is “F*ck This!”). Also, more EABA supplements and perhaps a “design exercise”, i.e. a set of bizarre RPG rules I want to do, just to see if it -can- be done. Art for the sake of the art, as it were.

That’s the great article! I just pass ‘n read it, two thumbs up! ;) 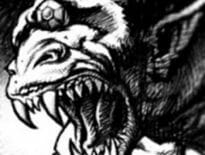