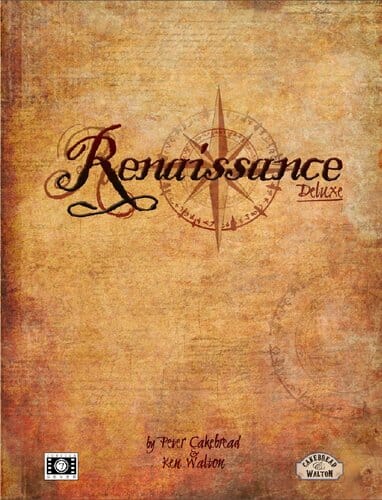 Cakebread & Walton currently have their Renaissance Deluxe d100 system under a big discount at DriveThru RPG.

The game is set in the age of sail and piracy, of black powder weapons and religious wars. It’ll serve as a flintlock and steel system for either a historical game, a fantasy game or alternative history setting. There are two different magic systems, sanity and quick combat. All rules are optional so that GMs can tailor mechanics to suit their own games.

The current discount is impressive but GMs stuck for cash can do even better. There’s a small raft of Renaissance material available for free.

The Renaissance – D100 black powder SRD is free. This is the core of the D100 RPG that includes the two magic systems (one of which, battle alchemy, was introduced in the first edition of Clockwork & Chivalry). It’s based on Newt Newport’s OpenQuest, released under an OGL and showcases from rules Clockwork & Chivalry the 2nd edition.

You can download the Renaissance Character Sheet for free and also the adventure The Wolves of the Coast.

The Wolves of the Coast was written by Adrian Jones as an one-shot adventure that pitches a group of Irish adventurers against Viking raiders who have kidnapped a princess. The adventure makes the point that the flintlock & steel vibe of Renaissance does not have to be all about black powder weapons. It’s an 11th century adventure in the spirit of Robert E. Howard.

Cool Tech GlaDOS ceiling lamp – in your very own home…

Comics Code Monkey Save World comic book Kickstarter
💰 Copper Coins 💰 Geek Native is an affiliate and may earn commission on purchases you make from third-party sites.
🍪 Privacy & Cookies 🍪 The site uses cookies to survive. By accessing the site, you agree to use your browser to control cookie use or take 1d4-3 privacy damage (tracking). If you defeat cookies via ad blocking, please consider the Patreon. An intro to cookies, and how to control them, can be found here. I Manage Cookies