Standard Action is a webseries that follows a disparate group of heroes and would-be adventures in what’s clearly a roleplaying setting. The first season enjoyed tens of thousands of views on each episode. This Kickstarter has been launched to support season 3.

Joanna Gaskell created the series, produces it and starts as Edda the Elf Barbarian. Geek Native’s been lucky enough to talk to Joanna about the Kickstarter project and Standard Action.

I don’t see any ads on Standard Action episodes in YouTube. If you’re not in this for the money, if this is costing you cash and time, why do it at all?

We started out just doing it because it was fun! We actually had no plans to make this the ongoing, time-intensive project with a fan base that it is now. We’re filmmakers who like to make stuff, and once we had our first episode in the bag and online, we were surprised to see how popular it was. Once we realized we had an audience, it became a means to show off our skills – webseries are free, accessible, and quick to turn around, so we made Standard Action a way to show the world what we could do, in terms of acting, writing, cinematography, costumes, makeup, visual effects, etc. It became a vehicle for our careers as filmmakers, and we’ve gotten more attention and work out of Standard Action than many of us have out of the “traditional” film avenues we’ve been pursuing. Plus, it kept being fun! Somewhere along the way I fell in love with the characters and the world, and I’d be lying if I said there weren’t some sentimental reasons for how far this project has gone. :)

A core audience for you must be gamers. Gamers have gotten used to Kickstarter being a way to get RPGs cheaply and before the shops. Are you being too kind to gamers, too optimistic, to hope that a webseries will fund?

We consider ourselves a webseries for “geeks of all kinds,” so yes, gamers are certainly a big audience, but also anyone who enjoys and celebrates nerd culture, and anyone who’s ever been a part of a fandom. Nothing makes fans so unhappy as to see their stuff being shut down by a Holloywood machine that says their cult classics aren’t mainstream enough to get the views that indicate “success.” Firefly, Community, Eureka, Arrested Development… the list goes on of alternative, quirky programming that gets shut down too early or battles to stay on the air. Kickstarter and other crowdfunding platforms are fantastic ways for people to control what they want to see. Geeks and nerds are used to having the stuff they love marginalized; well, this is a way for them to take back some of the power. And they’re doing it! Over the past year, we’ve seen lots of great alternative, nerdy webseries succeed in making new content just because people have stepped forward to help out. Transolar Galactica, Aidan 5, Chop Socky Boom… JourneyQuest blasted their Season 2 fundraiser out of the water. The nerds are speaking!

Where do you drum up all your extras?

Often our extras are our crew! We actually have very few true extras – almost everyone gets a line, and if they get a line, they’re usually roles that people have auditioned for. So if someone is on screen that doesn’t speak, usually it’s friend of ours – sometimes even cool cameos from other webseries! For example, in Season 2 in some of our office scenes, you can spot the creators of another Vancouver webseries, called Mind My Brains, Darling!

What about the props? Do you have to make them all or are there any LARP and Reenactment stores you recommend?

The props we mostly make ourselves, or source and modify from second hand stores. Our Art Director is pretty resourceful. If you’re talking weaponry, we sourced a bunch of our first season stuff from a shop here in Vancouver called Warriors and Wonders. For second season, our Weapon Master and Fight Choreographer, Edward Foy, sourced a bunch of our new weapons from his own personal collection – it’s great to have a weapons enthusiast on crew! Some of our more interesting armor pieces we sourced from local artisans; for example, Edda’s chainmail in Season 2 came from BC Chains, and Martin’s gorgeous Season 2 leather armor and baldric was designed by our Costume Designer Vanessa Driveness, and constructed by local leatherworker Aaron Harrison.

Do you see any convergence of the fan-based productions on YouTube with well funded TV shows? Will TV producers ever start to feel pressure?

I hope so! As far as I’m concerned, network TV has become pretty insipid – they need some pressure back in their lives to make things more interesting. By its very nature, Web-based productions are more convenient, easier to access, and are more audience-specific than TV. People can watch the kind of shows they want, when they want, for free. As soon as private interests start pouring more money into Web TV, and content producers start being able to monetize their creations, I’m hoping TV will have to fight more for its viewership.

Are there any fantasy or roleplaying based webseries you would recommend?

Sure! JourneyQuest is great – a real classic. Also take a look at Brothers Barbarian, Walking in Circles, and Border Guardians of Ackernon. 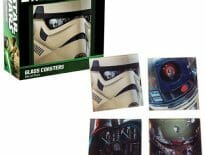 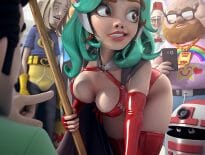