You are here: Home / Books / Comics / Judge Dredd might be gay but are fans really threatening to burn the comic?

The news that Judge Dredd might be gay is making the mainstream media. The Independent says;

The writers of the legendary lawman Judge Dredd have caused a stir among fans by suggesting he might be gay.

The first page from the latest edition of the comic, titled Closet, does show Dredd kissing a punk in a gay club. 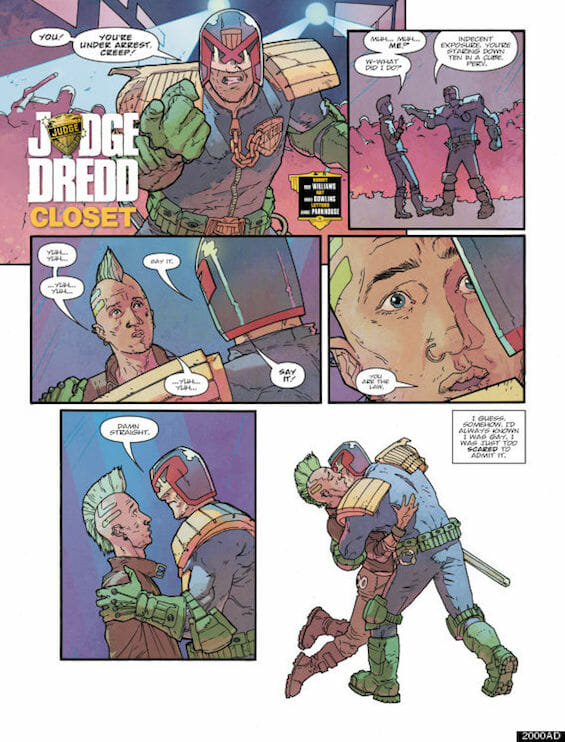 We have had quite an extreme reaction.

The Independent that points out that fans have threatened to burn the comic.

Geek Native carefully tracked through all the tweets about Dredd being gay over the last month and couldn’t find anyone making such threats. There were some geeks talking about burning a copy of Judge Dredd, though, that’s not the same thing.

There were two negative tweets. 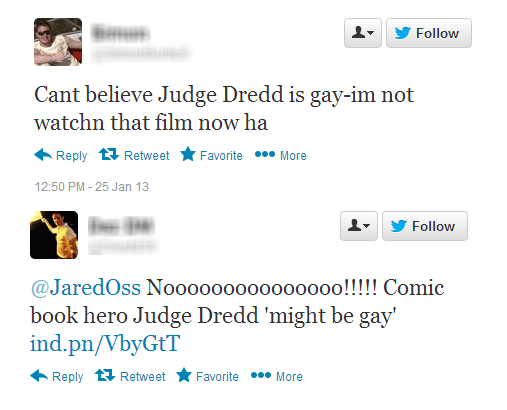 There was far more outrage at the suggestion 2000 AD fans would burn a comic in homophobia than there was to the idea the Judge might be gay.

Dredd may well be gay, straight or bi. But it’s all buried beneath layers upon layers (upon layers). There’s a man there, like anyone else, he’s not a robot. But Dredd’s pure repression. Although, can you imagine what would happen if that repression ever fell away, just for an instant?

Sure, Dredd could be gay. You can’t look at the original costume design of leather and chains and not see a fetishistic edge there. But, as I said before, Dredd’s feeling are so deeply hidden, he is extremely unlikely to ever let them show. With Dredd, you only ever get subtle glimpses of the man beneath.

Of course, fans have other places outside of Twitter to vent. The Huffington Post UK covered the story and at least one commentator wasn’t pleased.

There’s also Facebook. As it happens 2000AD teased the kiss picture back in October 2012 on Facebook. That’s where the most negative comments and threats to burn the comic appeared. It did happen. 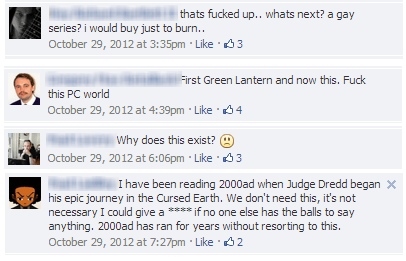 The good news is that most 2000AD fans seem to have no problem with the suggestion. Although some fans wonder why sexuality features as a storyline at all.

2000AD are promising a twist in the plot too. This teaser is just the beginning and even if this is nothing but a PR stunt it is entirely at home in the increasingly competitive comic book marketplace. Fans will get used to it.

Judge Dredd might be gay but are fans really threatening to burn the comic?

Tabletop & RPGs An exclusive look inside A Gallery of Rogues