It’s rare for me to be as excited about a RPG when it is initially announced as I was about Kuro. The promise of Japanese style horror blended darkly into a cyberpunk aesthetic was a strong one.

From the outset, Kuro had an expectations battle for this review – I was expecting a lot from the game and anything less would lead to disappointment and criticism. It’s perhaps a good thing that I didn’t notice that Cubicle 7 are publishing Kuro in the UK on behalf of Neko and 7èmeCercle. You see, the last time I dug into any 7th Circle managed game was years ago when they managed the impressive Kult. Expectations would have been even higher.

Kuro does contain plenty of horror elements. Japanese horror is about suspense. For the purposes of review this post will talk about some of the secrets behind the setting. If you know you’re likely to be a player rather than the GM then please consider whether you should keep reading. 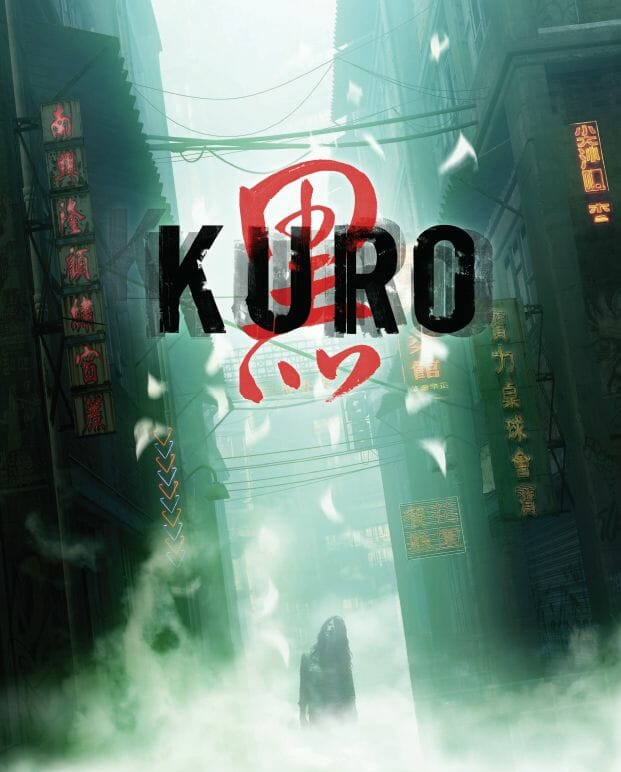 That said; this review can’t give all away Kuro’s secrets because there are some to come. Kuro is a complete roleplaying game. However, there will be a second layer, a second standalone game that called Kuro Tensei. It is possible that Kuro characters progress into Kuro Tensei.

Kuro is set in the year 2046 and in a Japan that’s under international embargo. The reason for the embargo seems very unfair – but the idea that bad things happen to good people is a common one in Japanese horror.

Due to an earthquake and horrible international tension, the Panasiatic Federation (China and both Korean sides) thought they were under nuclear attack and fired two missiles back at their likely enemies; India and Japan. Neither missile hit its target, the first, aimed at India, malfunctioned and exploded over North Korea. Thousands died. The second nearly hit Japan but at the very last minute and in a flash of light – it disappeared.

Japan is currently under international embargo because the world believes that the country must have been working on secret anti-missile technologies.

In truth; no one knows what happened. There are those in Japan who believe that the missile actually hit the island and they’re all now in the land of the dead.

Death is a taboo in the Shinto tradition of Japan. Shinto, even among the non-religious, is a rich part of Japanese culture. The fact that even a small number of people contemplate that they might be dead, trapped on a post-nuclear strike Japan is significant.

One of Kuro’s great strengths is that it does an excellent job at presenting the Shinto traditions in a meaningful and yet easy to consume way. I know why the number 4 is unlucky, why those who work with or near the dead (like crime scene investigators) are on the fringes of society and the bad omens around water.

Kuro also manages to take these traditions and extrapolate them into a Bladerunner style Japan. There are advanced technologies with machine but also in biology. There’s a whole upper class of super-rich, the Genocracy, who live in their tower blocks and who can replace their own body parts before they wear out. They may be immortal.

If you wanted you could play Kuro as a near future cyberpunk game. The technology story is that compelling. Japan has androids that look human and can even pass as human, in the right circumstances, for a little while. Combine that with a redux of the internet, holograms and virtual reality and you have a world setting rich enough for plenty of adventures.

Alternatively, you can play Kuro as a supernatural horror.

Why did the second nuclear missile fail to hit Japan? It was the invention of the spirits and ever since they have been active; woken up.

It helps hugely if you’ve seen either a Japanese horror movie like The Ring or Dark Water or, if not, a Western version that stays true to the idea. The drama in Japanese horror comes from the suspense and the struggle. This is a contrast to the gore-prone activities of Western horror and that fact that the badness usually strikes someone who has called attention to themselves.

These spirits are smart, careful and manipulative. Characters have every reason to be scared of them.

Kuro’s “Of Flesh and Shadow” chapter has enough details of villains both supernatural and otherwise to equip and arm any GM who hasn’t yet brought herself up to date with monsters from Japanese lore. However, it’s the very solid – sometimes dictatorial – advice from Kuro on how to deploy these enemies and encounters that give special value to the game.

The power of Kuro is neither the technological drama nor the supernatural drama; the great thing about this game is that it lets you mix the two together and provides a system and setting where that works wonders.

In the famous The Ring a brave mother battles against the murderous ghost of a young girl who goes after anyone who has watched a cursed video tape. It is clear to us the tape is haunted and the girl is a ghost. In Kuro, characters are familiar with holograms; they are common place. So is that flickering image of a pale girl who appears on camera just before a horrible murder a hologram sent by a cyber-stalking murderer or a ghost? Has the android been hacked or is it possessed?

To an extend I think Kuro will be a challenge to GM. This is not a game where characters band together to look for adventure. This is a game where bad things come to the characters and they have to try to cope with it.

That said; there is a twist as it turns out all PCs are special. All PCs carry a rare genetic mutation; a specific marker that can be detected through some medical tests. There are some agents in the world of Kuro who know about the marker and who know that those with it have a high propensity to be very influential; whether for the good or not. In Kuro this marker acts as a plot hook. I can only speculate what it means for Kuro Tensei.

I really enjoyed Kuro. I do think it will be a challenge – it will be different. It’ll be different for players and GMs. I’m certain this game is not for everyone but in a way that’s part of the appeal. A bit like Kult, Kuro has the feel of a cult game, something for close nit gamer groups willing to work together and push the boundaries together.

Recommended. Delightfully balanced horror and technology, lurking dangers and mysteries worthy of respect, Kuro has the makings of a perfect RPG setting.

Cool Tech Real life robotic Pixar Lamp
💰 Copper Coins 💰 Geek Native is an affiliate and may earn commission on purchases you make from third-party sites.
🍪 Privacy & Cookies 🍪 The site uses cookies to survive. By accessing the site, you agree to use your browser to control cookie use or take 1d4-3 privacy damage (tracking). If you defeat cookies via ad blocking, please consider the Patreon. An intro to cookies, and how to control them, can be found here. I Manage Cookies