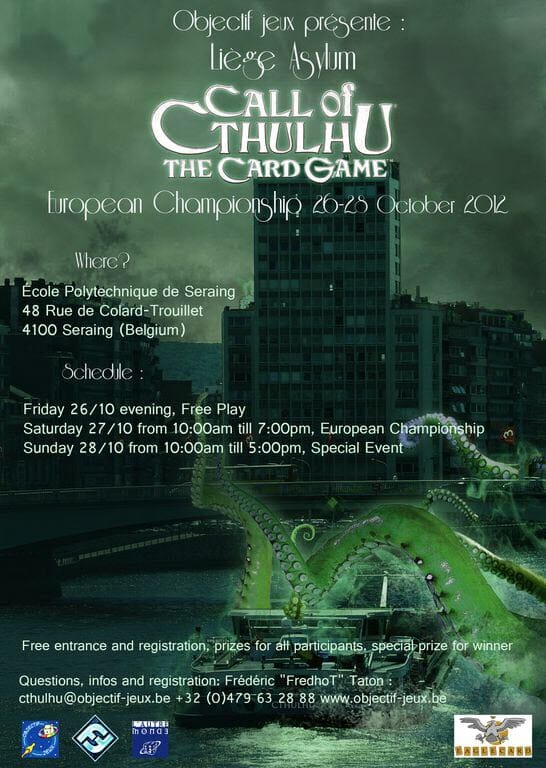 The 2012 Call of Cthulthu: The Card Game will be held this year in Liège, Belgium, on the 27th of October. It’ll take place during the 30th International Rendex-Vous of the Object-Jeux association and will have two side events. Cue last minute searching for flights to Liege.

The main event starts at 10am, will feature four Swiss rounds and then switch to an elimination play between the top eight players.

Last year there were 26 players up for it. This year, thanks to Fantasy Flight Games, EagleCard, Objectif Jeux and L’Autre Monde every player who enters will pick up a bunch of prizes. The European Champion will be given the chance to design his or her own card. Note; I think that would scare me more than the competition. The European Champion also gets free entrance into the first round bye for the FFG World Championship Weekend just a fortnight later in Roseville, USA.

There’s more information at the Tourney of Stahleck website or by emailing Frédéric Taton: [email protected].

Art Circuit board fossils
💰 Copper Coins 💰 Geek Native is an affiliate and may earn commission on purchases you make from third-party sites.
🍪 Privacy & Cookies 🍪 The site uses cookies to survive. By accessing the site, you agree to use your browser to control cookie use or take 1d4-3 privacy damage (tracking). If you defeat cookies via ad blocking, please consider the Patreon. An intro to cookies, and how to control them, can be found here. I Manage Cookies