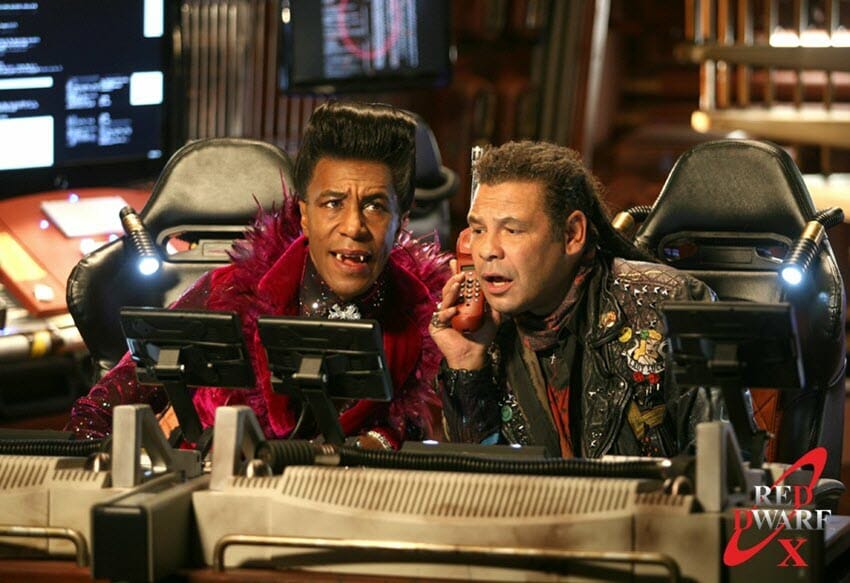 Dave has just aired the first episode of Red Dwarf X. Trojan felt like a classic, funny, Red Dwarf and yet it also felt more ultimate than that. It was familiar and yet suggested final at the same time.

The only problems I had with the episode were technical. I hope the technical glitches – the screen freezing and pixelating (Virgin Media) – were due to usually high demand.

Look! CGI! I said early on. I’m so used to the models that made Red Dwarf so famous in the past. I’m not saying that the changes made the show feel wrong, it just feels like it’s been brought up to date.

In fact, the jokes in Trojan felt up to date. Red Dwarf would often mine real life and apply those scenarios to Lister, Rimmer, Kryten and Cat and that’s exactly what happened here. We had shopping channels. We had the beach ball of doom – that dreaded ‘please wait’ icon from Apple that spins while you wait.

So how did it feel more ultimate then? Well – we met one of Rimmer’s brothers. This was an episode that reflected on Arnold Rimmer. This was a study of his life so far and a summary of where he has gotten to. This sets us up for the rest of the season and leaves us ready to see whether he can resolve any of his (many) issues.

All credit and praise to Craig Charles, Chris Barrie, Robert Llewellyn (who once tweeted a Geek Native link) and Danny John-Jules. There’s no denying they’ve not played these characters in a series (Back to Earth, the exception) in years and yet the characters felt familiar; the same and as fresh as ever.

I’ll certainly be tuning in to watch episode 2, Fathers and Suns, in a weeks time.

What about you? Did you enjoy the episode as much as you hoped?

Geek Stuff Picture this… the secret truth of girl gamer…
💰 Copper Coins 💰 Geek Native is an affiliate and may earn commission on purchases you make from third-party sites.
🍪 Privacy & Cookies 🍪 The site uses cookies to survive. By accessing the site, you agree to use your browser to control cookie use or take 1d4-3 privacy damage (tracking). If you defeat cookies via ad blocking, please consider the Patreon. An intro to cookies, and how to control them, can be found here. I Manage Cookies