You are here: Home / Games / Tabletop & RPGs / LARPers watch out: eBay bans the sale of potions and spells

The auction super-power eBay has updated its rules. As a result the selling of advice, spells, curses, hexing, conjuring, magic, prayers and the similar are no longer allowed.

The move is likely aimed at the very real practise of selling good luck or sex and love charms on the site as well as curses. This blogger once even wrote about someone offering to summon and command a succubi in an auction on the site.

That said; some types of LARPers may have to be careful with their choice of words in auctions if they wish to avoid automatic but incorrect suspended auctions. They need to avoid the sort of terminology that might make the auction look like it breaks the rules.

For example, Health Energy Potions, not really “potions” – just gimmicks from games – sometimes pop up. This example from Think Geek illustrates what I mean. 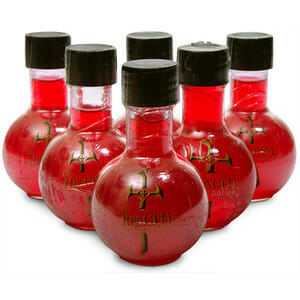 Another classic eBay item that gamer geeks do trade which might now be impacted are LARP spellbooks.

LARPers watch out: eBay bans the sale of potions and spells

Geek Stuff Fantastic Okami plush
💰 Copper Coins 💰 Geek Native is an affiliate and may earn commission on purchases you make from third-party sites.
🍪 Privacy & Cookies 🍪 The site uses cookies to survive. By accessing the site, you agree to use your browser to control cookie use or take 1d4-3 privacy damage (tracking). If you defeat cookies via ad blocking, please consider the Patreon. An intro to cookies, and how to control them, can be found here. I Manage Cookies