You are here: Home / Games / Doctor Who: The Card Game opens for pre-orders

It’s a British company with the license rights to the Doctor Who RPG. Cubicle 7 are boosting their connection to the famous timelord just as we approach the next season and the 50th anniversary.

The Doctor Who card game was designed by Martin Wallace and is designed for three to four players. Players have the simple goal of saving the universe while coping with rivals sending the Doctor’s enemies like daleks and cybermen to conquer the very places they are trying to protect.

The game features Matt Smith as the 11th Doctor and companions Amy Pond, Rory and River Song as the defenders.

At the time of posting, the Doctor Who card game is available for pre-order at a 10% discount. The discount is only available for early pre-orders and, no doubt, is a handy gauge for Cubicle 7 to use to measure interest.

The image below reveals what an in-game turn might look like. We see Daleks as enemy cards and the locations Alfava Metraxis (home to the Aplans until the Weeping Angels attacked in the mid 47th century) and Pompeii in 79 AD which is just before Volcano and the year the 10th Doctor visited with Donna Noble (and which featured Karen Gillan playing a soothsayer). 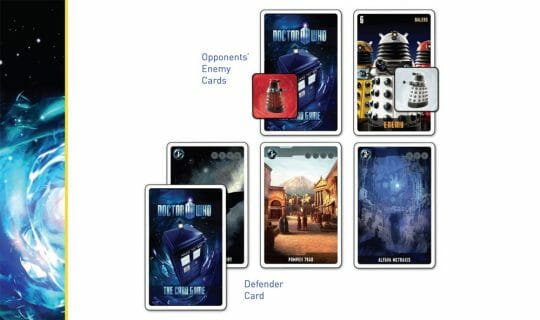 Doctor Who: The Card Game opens for pre-orders

Console Which UK pre-order bonus for Dishonored do you wan…
Music 99 seconds to recap the Lord of the Rings
💰 Copper Coins 💰 Geek Native is an affiliate and may earn commission on purchases you make from third-party sites.
🍪 Privacy & Cookies 🍪 The site uses cookies to survive. By accessing the site, you agree to use your browser to control cookie use or take 1d4-3 privacy damage (tracking). If you defeat cookies via ad blocking, please consider the Patreon. An intro to cookies, and how to control them, can be found here. I Manage Cookies