The OneBookShelf team – known for DriveThru RPG, DriveThru Comics and DriveThru Fiction are having a Christmas sale. 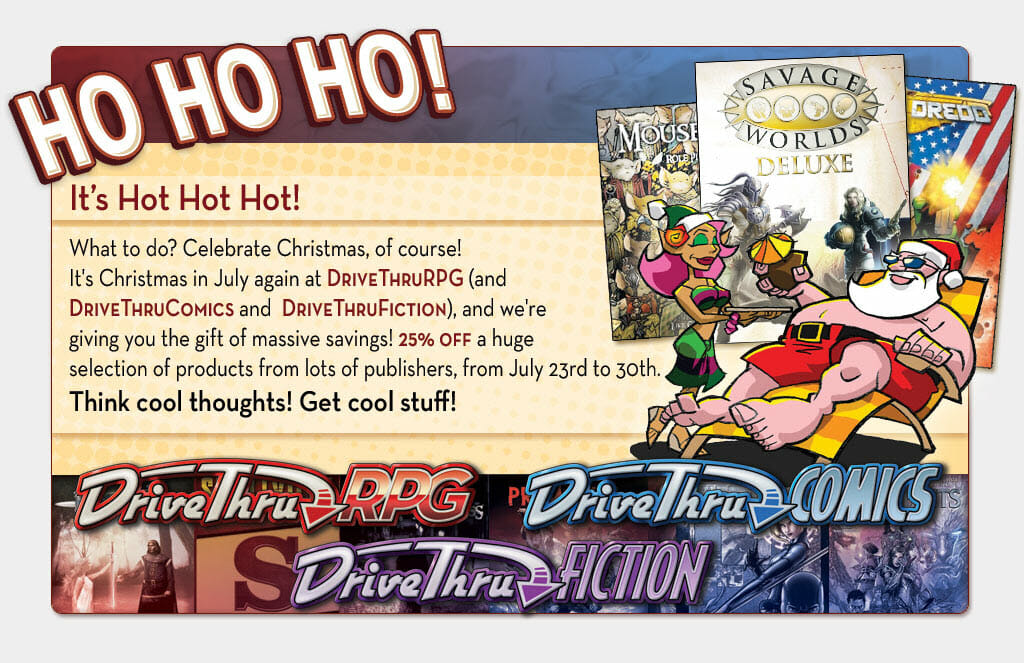 It’s a huge sale with hundreds of publishers in. Here are just a few random highlights!

RPG: Chaosium and Beyond the Mountains of Madness

Beyond the Mountains of Madness is the classic Call of Cthulhu Campaign.

Little by little they rose grimly into the western sky; allowing us to witness the various bare, bleak, and blackened summits . . . in the reddish Antarctic lights against the provocative background of iridescent ice-dust clouds. In the whole spectacle there was a persistent, pervasive hint of stupendous secrecy and potential revelation. . . . I could not help feeling that they were evil things – mountains of madness whose farther slopes looked out over some accursed ultimate abyss.
– Lovecraft

Beyond espionage, beyond military mayhem, Spycraft 2.0 is your gateway to an unlimited world of modern action-adventure! It takes the wildly popular Spycraft RPG d20 system to a whole new level: expanding and updating character options, condensing and refining the rules set, and providing the platform for any scenario you can envision! Whether your play style is intimate or epic, freeform or stat-driven, this landmark release contains everything you need to launch into the adventure today!

10th Muse: The Legend of Isis is from Blue Water Productions who make a series of different comic typesl from manga to stories of the British royals.

The wizards of the moon called Loam are desperate to rid themselves of an eldritch djinn threatening their peaceful existence. They are so desperate that they are willing to trick one god and kidnap another in order to force their assistance.

Isis and 10th Muse are thrust together and are forced to make a choice — with the fate of an entire society hanging in the balance.

Dissonance: Music for Esoterrorists by James Semple is one of the audio products sold by DriveThru Fiction. It’s designed to go with the Esoterrorists RPG – but doesn’t have to.

The Esoterrorists Theme: This music has been written to introduce a session of the game. It begins by hinting at the mystery and horror using sound design and a female vocal. The music then shifts into a faster rhythm culminating in the action theme of the game. The heavy drums and insistent violin ostinato are overlaid with distorted powerchords and squealing lead guitar lines representing the contemporary edge of the game. This track prototypes the sonic palette of the Esoterrorists mixing elements of rock, orchestra and dance music.

That’s just a sample; there’s loads, loads more! You have to hurry though as this sale closes in less than 7 days.

If you pick up any bargains why not let us know in the comments section. Which titles would you recommend?