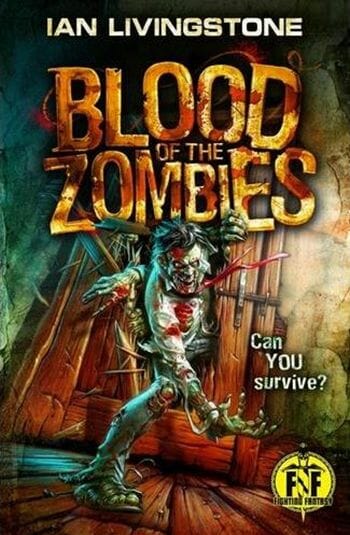 This blogger, like many other geeks, grew up on Steve Jackson and Ian Livingstone’s Fighting Fantasy series of choose your own adventure series.

This month, the first Fighting Fantasy book, The Warlock of Firetop Mountain turns 30. Speaking at the Develop conference in Brighton, Ian Livingstone said;

“When the 30th anniversary was coming along I thought it would be great to celebrate it, and I must do another one,”

The book – Blood of the Zombies – is a little different from many of the other Fighting Fantasy titles. It’s not a traditional fantasy setting. It’s modern day one.

In the book you “read” the role of someone who’s been kidnapped and who wakes up in chains in an underground, in a castle sell, somewhere in Romania. In the adventure book you quickly discovery that the castle is run by a mad scientist who has been injecting hundreds of prisoners with zombie blood.

Livingstone has commented on the zombies;

“So having been in the video game industry for over 20 years I’d seen the everlasting love for zombies people had, and realised I hadn’t done one around zombies before. I started off writing Blood of the Zombies set in my usual medieval world and I suddenly thought, why not move it to present day? I’d never done that before. It was a bit of a risk.

“I did, but I didn’t go the whole hog. I didn’t have the zombies running around shopping malls and 21st century streets. I kept the whole book inside a medieval castle. So it’s a toe in the contemporary but still harks back to the old medieval world.”

The Blood of the Zombies will also be available as iPhone and Android apps. The experience will be similar, but different.

Geek Stuff 6 Piranha Plants for around the house
💰 Copper Coins 💰 Geek Native is an affiliate and may earn commission on purchases you make from third-party sites.
🍪 Privacy & Cookies 🍪 The site uses cookies to survive. By accessing the site, you agree to use your browser to control cookie use or take 1d4-3 privacy damage (tracking). If you defeat cookies via ad blocking, please consider the Patreon. An intro to cookies, and how to control them, can be found here. I Manage Cookies