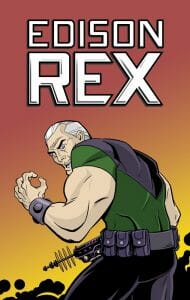 I’ve given up on superhero comics.

Well ok, let me rephrase that, I’ve given up on superhero comics from the “Big Two” DC and Marvel. I could rant at length about how they’ve been recycling the same stories and characters for decades, skipping from event to event in increasingly shrill attempts to get the attention of an increasingly jaded and shrinking market. I could also moan about the fact that Jack Kirby’s estate won’t see a dime from the billions that The Avengers movie made, I could even mention how “Before Watchmen” was the straw that broke this particular camel’s back, but that’s not what I’m here to talk about.

I’m here to talk about Edison Rex, one of the initial offerings from Chris Roberson’s new Monkeybrain Comics. Roberson was a writer for DC Comics who worked on titles like iZombie, Fables and Superman before deciding that enough was enough and leaving the mainstream to focus on creator owned works. Monkeybrain is a digital-only publisher who distributes via Comixology and has already amassed a particularly interesting pool of talent.

The one that interested me the most was Edison Rex though. Written by Roberson himself and illustrated by rising star Dennis Culver (seriously, check out the man’s Tumblr, he’s amazing), it tells the story of Edison Rex, the worlds smartest man and his neverending battle against Valiant, a selfless protector with powers and abilities far beyond those of mortal men. Well I say “neverending”, but SPOILER ALERT, it ends on page 11 of this 13-page issue 1. Faced with a world that needs saving and with Valiant no longer able to do so, it’s up to Edison Rex to step up to the plate and take over.

Ok, let’s get this out of the way, Valiant is clearly and unapologetically the latest in a long line of Superman stand-ins, Roberson seems happy to let people transfer their existing knowledge of the Superman/Luthor rivalry to describe a history to the two characters which really serves as prologue to the story we’re here to read. Despite my earlier claim however, Edison Rex isn’t just a Lex Luthor stand-in. DC’s Luthor would often claim he could make the world a better place if it wasn’t for Superman, but you usually get the idea that’s empty posturing. Here, Rex seems genuinely willing to step up to the plate in his rival’s absence.

Roberson’s writing is witty and well-paced, with tongue firmly in cheek throughout, and Culver’s lines are clean and expressive, delivering a wide range of emotions from each character.

The first 13-page issue is available now for 99 cents from Comixology. I’m not sure if they plan to put out subsequent issues at this price point and size, but I’d be curious to find out.

This superhero-themed post is from 2012’s Superhero Week. Made any good superhero discoveries online recently? Share them in the comments below. 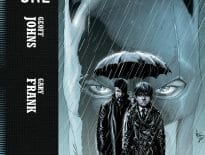