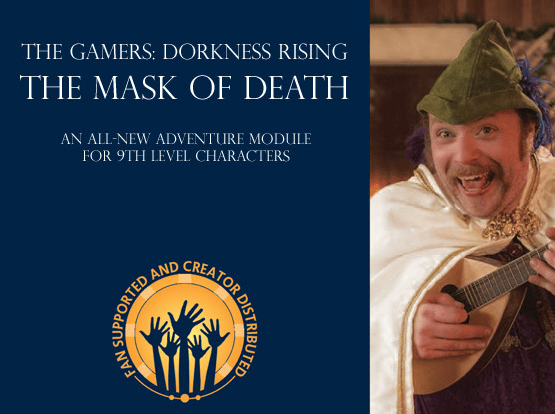 The Gamers is a basement budget film, a friendly spoof, on gaming from Matt Vancil and Dead Gentlemen Productions. The Gamers: Dorkness Rising is a sequel, set in the same gaming world, but focuses on a different playing group.

So, what’s Gamers: Dorkness Rising like? Wikipedia notes, in the style section, that Gary plays a scantily dressed female character called Luster. The problem is that Gary often forgets his character is a female and when this happens, in the movie, his character becomes a bloke in a blonde wig, only to be replaced by the actress once Gary remembers.

In 2008 Paizo were selling (and had exclusive rights!) The Gamers: Dorkness Rising at Gen Con.

Skip forward to this month and over on Kickstarter where we find Zombie Orpheus raising funds for a Pathfinder scenario. The Mask of Death is a quest for five 9th level Pathfinder characters.

Those characters can be those from Dorkness Rising or your own. It’s a printed product, 48-pages, colour cover and black-and-white interior. There will also be a PDF version which will be full colour.

This project will fund. At the time of blogging; The Mask of Death asks for $4,000 and has raised over $6,000. There’s nearly two weeks to go and smallish pledges give you a copy of the adventure.

Geek Stuff Extreme weather, is this TV from a gaming world?
💰 Copper Coins 💰 Geek Native is an affiliate and may earn commission on purchases you make from third-party sites.
🍪 Privacy & Cookies 🍪 The site uses cookies to survive. By accessing the site, you agree to use your browser to control cookie use or take 1d4-3 privacy damage (tracking). If you defeat cookies via ad blocking, please consider the Patreon. An intro to cookies, and how to control them, can be found here. I Manage Cookies