Jim Zub is a writer and artist based in Toronto, Canada. He has worked for Capcom, Hasbro, Namco-Bandai and others. Jim’s the lead writer on the new Pathfinder comics and has agreed to do a Q&A interview with Geek Native.

Geek Native quoted Jim along with the first art teasers from the series. He said;

“Pathfinder has blazed new trails in gaming and fiction, winning over thousands of fans all over the world. I’m absolutely thrilled to add to its mythology and flesh out the iconic characters at the heart of the Golarion world,”

So, that’s what he said then – let’s see what he has to say now. 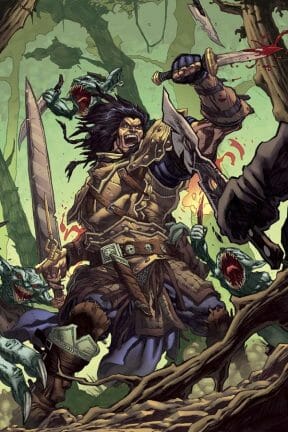 Q1. How did this happen? To the best of your knowledge – who got in touch with who to say; “Hey, let’s do a Pathfinder comic book series,”?

Erik Mona, Publisher at Paizo, and I have known each other for years. When I saw him at Gen Con Indy last year we had a great chat about gaming and the comic industry. He mentioned there was some movement on possible Pathfinder comics and I told him I’d be thrilled to be involved if it all came through. Months later, after Dynamite announced they’d licensed Pathfinder for a comic series, Erik threw my name in the ring and asked if I’d like to pitch for it as a writer.

Q2. Had you much experience with Pathfinder before this project? Does it matter?

I’ve played a slew of tabletop RPGs over the years, Pathfinder included. My gaming roots and love of sword & sorcery run deep. I think having a feel for the flavor of the game world and knowing how the game and fiction tie together is important. All the iterations of Pathfinder have their own strengths and different focal points when it comes to telling stories, but there’s a consistency throughout.

Q3. Why do you think Pathfinder has been so successful in the highly competitive RPG marketplace?

Pathfinder carries on a legacy of classic fantasy RPGs while smartly integrating new technology and a tight knit online fan base. The gang at Paizo have done a great job at listening to their fans while maintaining a strong overall vision of what the Pathfinder brand is. They’ve created a world that people can make their own in their gaming sessions while weaving in powerful visual and story elements of the fantasy genre that fans know and love. It’s a delicate balance of the new and the familiar they’ve masterfully managed to weave together.

Q4. With the above question in mind; what do you think Pathfinder players will want from a Pathfinder comic book series?

The Pathfinder comic is unique in that it finally defines the “iconic” Pathfinder cast. The iconics are the characters Paizo visually uses to brand all of their game sourcebook artwork and advertising. Those characters are named and very familiar to Pathfinder fans, but their histories and motivations have never been fleshed out. Their stories have never been told. Getting a chance to work with Paizo and build that material is a real thrill for me. I think it’ll engage Pathfinder players and give them a whole new aspect of the game to enjoy. It fills in part of the world without repeating or stepping on any of the gaming material. 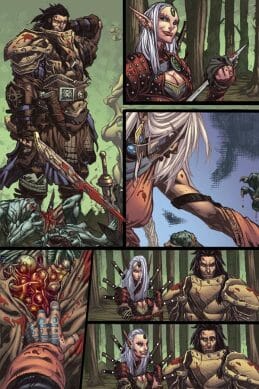 Q5. Are Pathfinder players intended as the main audience for the comic series? Or is the goal, including the business case, to reach out to a new and different players and give them a reason to pick up the books?

When I pitched the series to Paizo and Dynamite I stressed that the comic had to stand on its own two feet as a self-contained fantasy story. New readers will be looking at that “issue #1” on the cover and I think that rightfully carries an expectation of being the ground floor. Thankfully, they agreed whole heartedly. There are all kinds of great elements that Pathfinder fans will be able to appreciate, but the story begins in our first issue with everything you need. New readers who have never played the game or read any of the fiction will be able to enjoy Pathfinder as an engaging fantasy adventure story without feeling left out.

Q6. Teasers for the comic series speak of an ancient evil rising up again, shepherding the goblin tribes, and looking to extend its shadowy influence again. How far from Tolkienesque fantasy can games like Pathfinder go before they become too unfamiliar and lose their appeal?

A lot of fantasy stories draw upon Tolkien-style tropes, but I think the real key is creating a cast of characters readers can grow attached to. There is a larger plot for the Pathfinder comic and it has some of those classic sword & sorcery-isms, absolutely, but who is on that adventure, what drives them and how their goals and aspirations change as the story progresses is what will really make the journey worth following.

Q7. What has helped inspire the Pathfinder comic story line so far? Music, TV shows, other comics, games or even films?

I’m writing Pathfinder as a character ensemble, so I look to great “group” stories of all stripes – fantasy novels like Lord of the Rings or Dragonlance, TV shows like Avatar the Last Airbender/Korra, Buffy the Vampire Slayer and Firefly, classic comic runs of X-Men or the Fantastic Four – anything where you have wonderfully memorable character interactions with an eclectic cast alongside an evolving larger plot.

Q8. Issue #1 follows Valeros, the sorcerer Seoni and the elven rogue Merisiel. What can you tell us about these characters which has not already been revealed? Why will Geek Native’s readers want to follow their adventures?

Each character has their own personality quirks and defining goals, and seeing how those move together or clash will keep readers engaged and entertained.

Valeros is a headstrong warrior who wants to solve every problem with a swing of his sword or a well-placed kick. His kneejerk reaction of resisting authority and protecting his allies at all costs keeps the story humming along well.

Seoni may look like a barbaric tribal sorcerer, but her personality plays against those expectations. She’s careful, calculating and far more strategic than people who first meet her expect.

Merisiel is an elf, so she’s extremely long lived and has experienced the equivalent of many human lifetimes. Although on the surface she doesn’t appear to worry about anything, under that veneer is a troubled rogue who hides her true self from those around her.

Q9. What plans are there to help link the Pathfinder comic series back to the Pathfinder RPG? Are you keen that gamers include elements of your story in theirs?

All the story material I’m putting together works seamlessly with what’s already been established in the Pathfinder RPG. There are subtle tie-ins to past Adventure Paths and cameo appearances by characters that have featured prominently in both the game sourcebooks and fiction.

For the actual comic, Dynamite is working with Paizo to create new Pathfinder game material that will be featured in the back of each issue, including brand new adventure scenarios, character stats, world information or battle maps.

I think it’s invaluable for anyone writing comics to be able to think visually, whether or not they’re an artist. Comics are the fusion of words and pictures working in tandem, so visualizing scenes clearly while writing and knowing when to let the artwork drive the story is crucial to creating a solid collaboration.

Andrew Huerta is doing a bang up job on the Pathfinder comic. I can see his art and storytelling growing with each page he hands in. I find the collaborative process of learning how an artist works and finding ways to engage and inspire them to be one of the most satisfying things about working in comics. When you sync up with an artist on a series and can strengthen each other’s work, it’s an absolute joy.

Interview with Jim Zub, lead writer for the Pathfinder comics 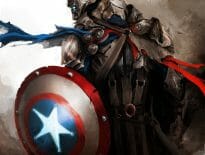