Tabletop Forge is a Kickstarter project to build a Google Hangout app. 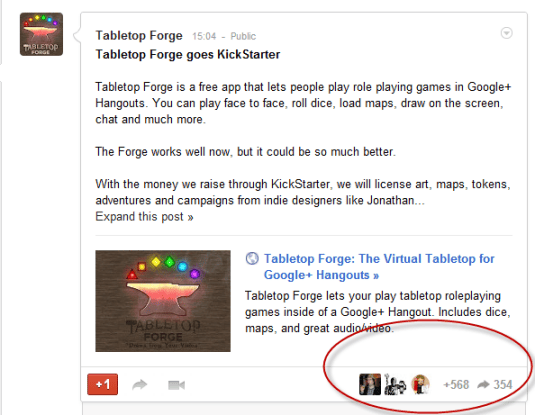 It’s a very good sign that the campaign has exploded on Google+ with the interest. As adland says; “It’s gone viral”. At the time of posting this blog post Google+ comments about Tabletop Forge. It’s interesting to note that only a small percentage of people expressing an interest in the project have backed it.

It helps to have tried a Google Hangout to understand why this Kickstarter is so tempting. Google Hangouts are exceptionally easy to do and a very good video chat experience. This blogger certainly thought almost immediately how Hangouts could be used for remote RP within seconds of his first Google Hangout.

Having said that only a fraction of apparent supporters have backed the project the numbers look good. With 29 days still to go the project has nearly 90 backers and is approaching $2,000. Those numbers are fluid, they will rise, and the team is only asking for $5,000 for success.

I’m a backer. Are you tempted?

Movies Never seen before: Return of the Jedi footage
💰 Copper Coins 💰 Geek Native is an affiliate and may earn commission on purchases you make from third-party sites.
🍪 Privacy & Cookies 🍪 The site uses cookies to survive. By accessing the site, you agree to use your browser to control cookie use or take 1d4-3 privacy damage (tracking). If you defeat cookies via ad blocking, please consider the Patreon. An intro to cookies, and how to control them, can be found here. I Manage Cookies