Steve Jackson of Steve Jackson Games launched a Kickstarter few days ago. He was asking for $20,000 to republish Ogre. Ogre was his first game ever. It’s about future tank warfare and you can back it here.

The Ogre Kickstarter project was successful in 2 hours. Pledges for $3,000 have sold out. You will have to be lucky to land the $4,500 pledge.

There you have it – Ogre will happen. You have a chance to pick your reward. Why not take part?

The Mega-Kickstarter: Steve Jackson raises hundreds of thousands for Ogre 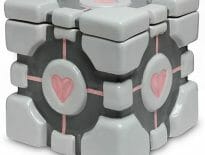 Geek Stuff Companion Cube turned cookie jar
💰 Copper Coins 💰 Geek Native is an affiliate and may earn commission on purchases you make from third-party sites.
🍪 Privacy & Cookies 🍪 The site uses cookies to survive. By accessing the site, you agree to use your browser to control cookie use or take 1d4-3 privacy damage (tracking). If you defeat cookies via ad blocking, please consider the Patreon. An intro to cookies, and how to control them, can be found here. I Manage Cookies