NEO Magazine is the UK’s longest running publication for anime, manga and Asian culture. The magazine founded in 2004 and will soon reach it’s eight anniversary and publish its 100th issue. That’s worth knowing because Uncooked Media, the owners, are planning on running a series of competitions online to celebrate.

However, today’s anime fans – like this blogger – aren’t always in the best place to make do with paper magazines. The digital presence of NEO matters too. The good news is that the site – www.neomag.co.uk has been revamped. 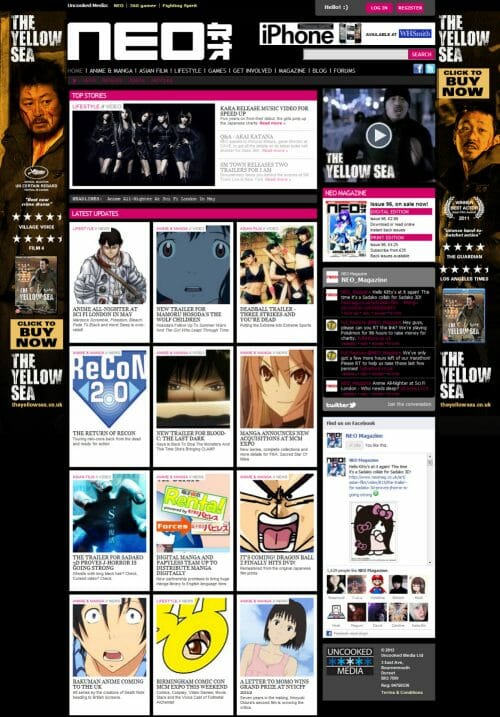 “We’ve been working away behind the scenes to transform NEO’s website into the essential, one stop shop for all your east Asian entertainment needs! Expect exclusive daily updates for the site, which features anime and manga, Asian film, lifestyle and games sections, including news, reviews, features and trailers. We’ve also got information about how to interact with the magazine and see your work and comments printed in the next issue, plus handy feeds from our Twitter and Facebook profiles. Plus, you can now even download digital copies directly from the site, too!”

The digital edition is a big step forward and great news for anyone with a tablet or iPad.

It’s also worth noting NEO has really boosted its social profile too. This is a clever idea as NEO produces English language exclusive after exclusive and assets like their Facebook Page will help spread those successes to an audience who may not have known to check NEO in the first place.

On a similar note they have a Twitter profile and my personal favourite for image sharing is their Tumblr.

Cool Tech Skyscrapers for the apocalypse roll through the ru…
Music Broken Doll flirting with the UK
💰 Copper Coins 💰 Geek Native is an affiliate and may earn commission on purchases you make from third-party sites.
🍪 Privacy & Cookies 🍪 The site uses cookies to survive. By accessing the site, you agree to use your browser to control cookie use or take 1d4-3 privacy damage (tracking). If you defeat cookies via ad blocking, please consider the Patreon. An intro to cookies, and how to control them, can be found here. I Manage Cookies