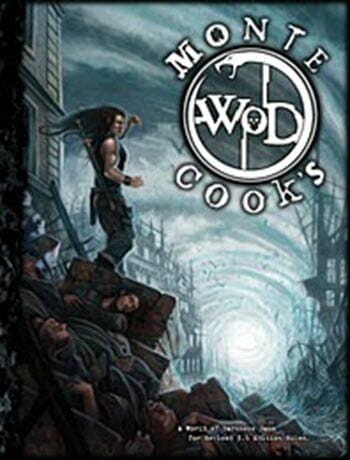 White Wolf have a special deal on DriveThru RPG for Monte Cook’s World of Darkness book. This link puts the book in your basket! beware at the discount. I guess they don’t want to share the discounted price with people outside the mailing list… so, um, time will tell of what they make of Geek Native sharing it here!

The game will enable players to take the roles of vampires, mages, werewolves, demons and the Awakened.

One year ago, eldritch horrors of cosmic malevolence called the Iconnu attempted to destroy our reality. They failed, but the attempt left the world in rapidly darkening shadow. Dead souls returned to claim living bodies, creating blood-drinking undead fiends: vampires. Bestial spirits came as well, to create werewolves, and demons formed bodies from worldly matter. Magic crashed back into the world, and mages wield its power for whatever purpose suits them. Humans called the Awakened unknowingly keep the darkness at bay. These supernatural creatures struggle against each other and clash in the shadows, most attempting to destroy the world, but a few fighting to preserve it. And over it all, the Iconnu still lurk, squeezing the world like an eggshell.