You are here: Home / Games / Console / Does the Final Fantasy XIII-2 trailer do anything for you?

I’m sure there are many gamers really played that Square Enix are giving us a chance to return to Final Fantasy XIII and the game.

There are some of us scratching our heads, though. Was the game really that good? Did one or two roleplayers give up, bored of farming the grasslands for XP, before finishing the game? Could some of the characters have been a little less annoying?

Hmm. Step forward this Final Fantasy XIII-2 trailer with its chance to impress. Does it work for you?

Hard to build up any motivation for it, isn’t it? Do you think it’s odd they’re sticking with the franchise?

I dont think it’s odd because they do have fans, it will sell, they will profit… but I remember the first time i saw videos of FFVIII for example and it was completely different. I just couldn’t wait to get my hands on it. Now there isn’t much flare. It’s just another sequel.

Does the Final Fantasy XIII-2 trailer do anything for you? 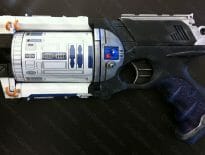