You are here: Home / Movies / Pulp: A comedy movie about comics

Pulp is a British comedy being directed by Adam Hanmy, Shaun Magher, written by Bode Ode O’Toole and produced by Phil Bland, Matt Hubbard and Adam Hamdy. It features Jay Sutherland as Tony, Gavin Molloy as Rick and Simon Burbage as Keith.

Okay, so I’m struggling to place all those names but there’s some money in the campaign as they’re able to pay for video trailer ads as seen below.

The plot features Tony Leary, owner of Junk Comics and who has one last chance to launch a successful comic franchise. His previous efforts; Infinite Finity, Thunder Racers and Rat Warriors failed. His new hero – The Sodomizer – must be a success and so the launch at the British International Comic Show must go well.

There’s a catch; the police have drafted him into to trying to spot a gang of Geordie criminals who are using a comic company to launder dirty money.

Pulp: A comedy movie about comics 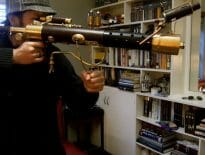