You are here: Home / Books / Comics / The MCM Expo, Comic Con, London round up

Did you make the MCM Expo at ExCel London this year? It was a shame to miss it. Late breaking news included a world exclusive trailer of the forthcoming Green Lantern that aired on the Saturday as well as an exclusive on Henry Cavill’s Immortals fantasy-action movie.

Brian Blessed was there. Most of the Red Dwarf crew; Craig Charles, Danny John-Jules, Hattie Hayrdige and Norman Lovett made the show as well. Thomas Craig from the Murdoch Mysteries hosted a panel on the show and signed autographics.

In the writing and illustraiton world we had Jonathan Stroud (Bartimaeus Trilogy), Andrew Donkin (the Artemis Fowl graphic novel conversion) and illustrator Lee Sulivan (Transformers, Judge Dredd and Doctor Who).

Comic book artist Frank Quitely was another of the very many comic book writers and artists – as was David Hine. Both have worked on the X-Men series and there was a chance to win tickets to X-Men: First Class at the expo. Rufus Dayglo also made appearance, he’s currently working with Alan Martin on Tank Girl, but does extra works for Titan Books here in the UK. Other comic book talents included Warren Ellis (Transmetropolitan, The Authority, Fell), Jamie McKelvie (The Uncanny X-Men: Heroic Age, Phonogram, Iron Man), Gary Erskine (Judge Dredd, Knights Of Pengragon), Becky Cloonan (Demo, Northlanders and American Virgin) and many more. If you’ve got stories or photos from other artists or writers then please do share!

GameSpot was a big influence at the Expo. They brought a games showcase which included the RPG Dungeons and Dragons: Daggerdale, the RPG Deux Ex: Human Revolution and the CCG conversion Magic the Gathering: Duels of the Planeswalkers.

Yurei Urie was there with her unsettling horror doll collection – and some people had the chance to buy the new doll, Supernae, which is bound to be a collectors item as only 50 have ever been produced.

If you’ve been a native geek for a while then you may well recall this blog covering Beckii Cruel, the (at the time) 14 year old dancing hit who’s anime inspired routines won her fame in Japan. That’s right. Beckii was there – I hope everything is still going full steam for her and the Cruel Angels.

Despite all the good news there were rumours that Big Brother had “talent scouts” at the expo looking for geeks who might be suitable for the house. This blogger suspects that most of the crowd wouldn’t have been tempted by the £100,000 prize for winning the reality TV show.

The MCM Expo, Comic Con, London round up 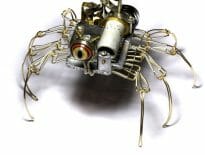