Strait Jacket is an anime that has a lot of promise but which fails to make good. 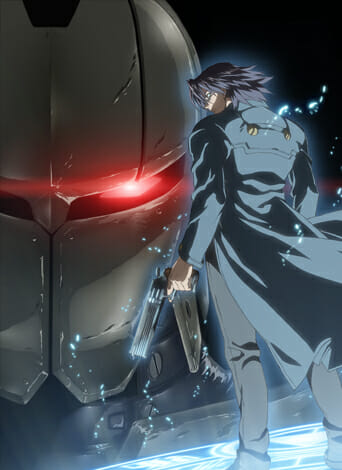 Set in an alternative history we have a world where they discovered magic and have begun to harness it. It’s 1899 but we have cars, machine guns and great medical science.

Magic, however, comes with a terrible price. If you use it you turn into a demon. The anime does not present this as a gradual change, not one with warnings, but a sudden flip and a dramatic transformation.

Amazingly mankind willingly takes this risk and is fairly addicted to using magic to get things done.

The magicians-cum-scientists invented mold suits designed to try and absorb the damaging effects of magic. It’s these suits that are nicknamed “Strait Jackets”. A special police force and police sorcerers using battle mold suits are deployed to go after the deadly demons.

That gives us Rayotte Steinburg. He battles demons using the very magic that could transform him into one. Ah. We should be ready to queue the World of Darkness angst. Straight Jacket fails to deliver that.

There is the sense that we should be getting angst. Rayotte has a history that’s supposed to keep the anime interesting – but it doesn’t.

The problem isn’t with the plot. I can see why the manga is successful. The problem is entirely with the pacing. It’s a 76 minute movie and it would be so much better as a mini series of six parts. I get the feeling they had hoped for more as there are characters like Filsis Moog (how’s that for a crazy name) who should be important but actually barely scrape a bit part.