You are here: Home / Games / Console / Project Cafe: Wii 2 to out power PS3 and have camera controller

The rumours that Nintendo will launch a new console next year are burning hot. Kotaku have all but confirmed it. We’re expecting the news at E3 – that’s June 7 – although Nintendo often old a press conference the day before.

In fact, there’s less debate about whether the Wii 2 is on the way – people are taking that as a given – as there’s debate as to how powerful it’ll be. Insiders (not my insiders; other people’s insiders) are heavily suggesting the Wii 2 (aka Project Cafe) will have more juice than the Xbox 360 and PlayStation 3.

Yeah. Sure. It’s not likely to have as much power as the “Xbox 3” or PlayStation 4 but if Microsoft and Sony stick to their guns neither of those consoles are heading our way any time soon.

The French site 01net is touting a source that seems to confirm that there’s a Project Cafe underway and that the controller will have an “HD screen” built in. In fact, this might be a touch screen and there might even be a camera. Never heard of 01net? They broke the news about the NGP so they really do have some pretty good contacts (is Ubisoft looking guility?)

The image for this blog post is not Project Cafe/ the Wii 2. It’s a “Wii Robot” known as the WiiFly designed by the famously named Florence Boob.

Project Cafe: Wii 2 to out power PS3 and have camera controller

time to read: 1 min
TV A video catchup of all 47 years of Doctor Who … 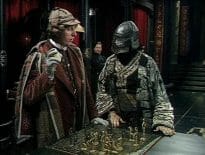